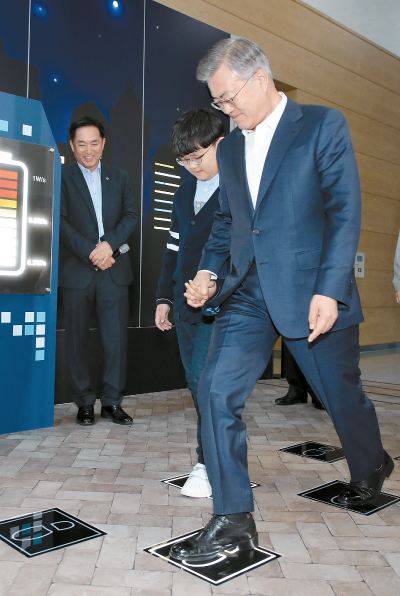 President Moon Jae-in steps on a device that converts every step into energy at a smart city strategy briefing held at Bexco in Busan Wednesday. Moon said Korea is the first country where smart cities are being developed on a national level. [YONHAP]

The campaign to build smart cities has entered a new phase, with the government revealing in what ways exactly two of the chosen urban centers will be made smart.

In comments Wednesday, President Moon Jae-in said Busan will specialize in water management and robotics, and Sejong will focus on artificial intelligence (AI).

“Securing the lead in global smart cities is important,” he said while visiting Busan to be briefed on smart city strategies. “Creating the leading smart cities in Busan and Sejong shows clearly our government’s goal and will.”

The president’s visit to the largest city in south of the Peninsula was his third regional economic trip this year — after Ulsan and Daejeon — and his sixth city tour since visiting Gunsan, North Jeolla, in October last year. There, he attended the start of a major renewable energy project on Saemangeum, one of Korea’s largest tracts of reclaimed land.

According to the government, last year a special smart-city committee under the Presidential Committee on the Fourth Industrial Revolution reviewed 39 candidates and selected Busan’s Eco-Delta City and Sejong’s 5-1 Life Zone for trials.

Ground will be broken this year with completion set for 2021.

“We are the first in the world to adopt laws related to smart cities,” President Moon said, adding that while many countries are competing in the smart-city race to lead in fourth industrial revolution technology, Korea is the first where trial cities are being built on a national level.

“As we live in an era where life without the internet and smartphones is unimaginable, smart cities will soon change our lives,” Moon said.
The president emphasized the smart cities won’t just be retreads of existing cities. They will be completely new.

“It is an ambitious plan of creating trial smart cities that perfectly combine cities with fourth industrial revolution technologies on a completely new slate,” Moon said.

In order to achieve this goal, the government will be investing 3.7 trillion won ($3.29 billion) jointly with the private sector through 2021.
“We plan on creating an innovative ecosystem by fostering new industries, such as robotics at the smart city in Busan, while creating a future waterfront city,” Moon said.

“A smart city is a city where technologies serving the people come alive,” Moon said. “The major technologies of the fourth industrial revolution will make our lives safer and more convenient,” he added. “Transportation, accident prevention, administrative processes, medical services and childcare services, which have historically operated independently, will be connected more organically and efficiently.”

He said beginning in 2022, when the smart cities are in operation, Busan residents will be able to save 124 hours a year — including 60 hours spent on roads, 20 hours on administrative processes and five hours at hospitals.

“With the consolidated of safety management systems, disaster information — like that related to earthquakes and fires — will immediately be sent out by alert, and this will reduce firefighter response time by five minutes, while the crime rate will drop 25 percent and vehicular accidents will be reduced roughly 50 percent.”

He said that with a real-time health monitoring system, Busan residents will be able to get customized health management, while various robots, from AI-based robotic assistants for home, delivery robots and rehabilitation robots — will help improve daily lives.