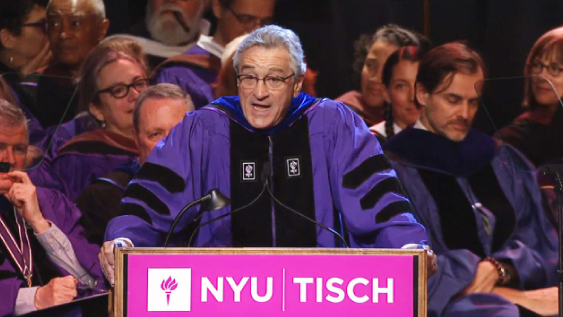 Actor Robert De Niro spoke at the commencement ceremony of New York University’s Tisch School of the Arts graduation in 2015. To the students who aspire to be directors, actors and producers, he said, “You made it, and you are [expletive!]” People laughed and he continued.

He said the graduates of the nursing school, dental school, accounting and management schools would be employed, but the graduates of the School of Arts would not be. But that wasn’t all. He said, “And me — I’m here to hand out my picture and résumé to the directing and producing graduates.” He was sure the students would succeed. “You discovered a talent, recognized your ambition and developed a passion. When you feel that you can’t fight it, you just go with it.” Mentioning how he had read seven times for an audition but didn’t make it, he said, “I’m excited to be in a room of young creatives who make me hopeful about the future of the performing and media arts and I know you’re going to make it, all of you. Break a leg!”

This is how graduation speeches go in U.S. universities. Celebrities share their life wisdom with humor. Former president George W. Bush spoke at the centennial graduation ceremony of the Southern Methodist University 2015, alma mater of his wife Laura Bush. “And as I like to tell the ‘C’ students: You, too, can be President.” He encouraged the students by admitting that he was also a C student. During the 13 minute-50-second speech, there were 22 laughs and 12 rounds of applause. There was laughter every 40 seconds and applause every 70 seconds.

Former Google chairman Eric Schmidt spoke at the 2012 graduation at Boston University and stressed the significance of offline relationships. “These computers, they have speed. They have memory. They have intricately complicated wiring and unfathomably complex circuitry. But here’s one thing they don’t have. What they don’t have: is heart. Remember to take at least one hour a day and turn that thing off […] Take your eyes off the screen and look into the eyes of the that person you love.”

Colleges and universities work hard to invite a good speaker for graduates. The celebrities who are asked to speak carefully write their speeches. Microsoft founder Bill Gates is said to have prepared the 2007 Harvard University graduation speech for six months. He received speech guidance from Warren Buffett. There are many great speeches and the media cover them. That is very rare in Korea. Korea seems to have trouble following such examples in the United States. Perhaps, there are not many people with wisdom to offer graduates in Korea. I am envious of U.S. graduations, which seem to overflow with respect.