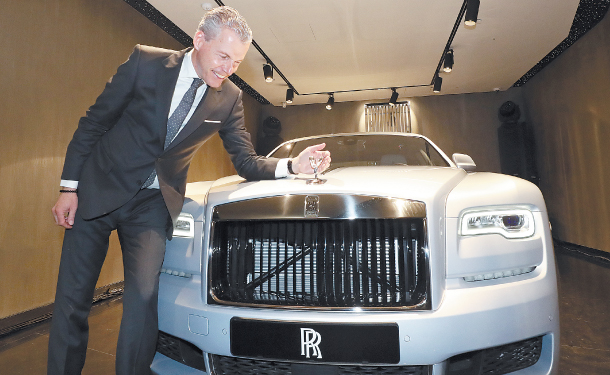 Rolls-Royce Motor Cars CEO Torsten Muller-Otvos poses next to a Rolls-Royce Silver Ghost at a launch event on Wednesday for the automaker’s renewed showroom in Cheongdam-dong, southern Seoul. [YONHAP]

While most local automakers have adopted the rule, Volvo has been the only overseas brand to do so.

The U.K.-based automaker said it will abide by the country’s revised auto guidelines to strengthen its quality commitment to Korean customers.

“Rolls-Royce will be the first luxury brand to accept the amended automobile management act,” said Rolls-Royce Motor Cars CEO Torsten Muller-Otvos at a launch event on Wednesday for the automaker’s showroom in Cheongdam-dong, southern Seoul.

“It is our responsibility … to reassure our Korean customers that we will stand by our promise of ultimate quality,” added Muller-Otvos.

The Korean unit of Mercedes-Benz was fined 2.8 billion won ($2.5 million) in December for violating environmental and customs law regarding emissions certifications.

BMW was fined for similar reasons at the start of this year.

The quality push from Rolls-Royce comes as the luxury automaker achieved record sales figures last year in the Korean market as foreign imported vehicles continue to grow in popularity.

According to the Korea Automobile Importers & Distributors Association, Rolls-Royce sales in the domestic market grew 43 percent to 123 units last year from 86 in 2017. Foreign auto imports increased by 11.8 percent.

According to Rolls-Royce, the brand’s sales grew at a rapid pace in Korea last year thanks to an expanded lineup, including the Phantom.

The CEO said he expects the company’s performance in the country to continue to improve.

“Korea is a very important cornerstone in our Asia strategy,” said Muller-Otvos. “We might even see at a certain moment Korea overtaking the Japanese business in terms of size.”

The luxury automaker’s chief also emphasized the automaker’s commitment to the luxury sector as the auto industry braces for major changes.