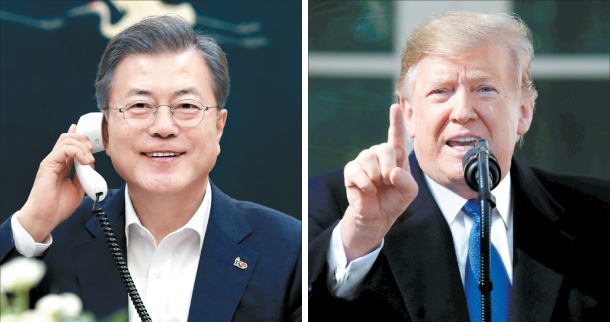 South Korean President Moon Jae-in told U.S. President Donald Trump Tuesday night during a phone call that he was “determined” to carry out joint economic projects with North Korea if Trump “requests” that the South do so.

Moon floated the possibility of economic re-engagement with Pyongyang just a week before Trump is set to hold his second summit with North Korean leader Kim Jong-un in Hanoi. This fueled speculation that the issue could be on the agenda for the leaders’ meeting on Feb. 27 and 28.

Seoul’s resumption of cross-border economic initiatives has long been blocked by Washington, which refuses to lift international sanctions on the North until its final, fully verified denuclearization, also known as FFVD.

Blue House spokesman Kim Eui-kyeom said in a statement that Moon’s latest telephone conversation with Trump lasted for 35 minutes from 10 p.m. on Tuesday, Seoul time. According to Kim, Moon and Trump mostly talked about how to successfully hold Trump’s second meeting with Kim Jong-un.

Moon, the spokesman, said, asked Trump to “use South Korea’s role” to offer corresponding measures in exchange for the North’s denuclearization. The Blue House chief pointed out that he was determined to engage economically with the regime and link both Koreas’ roads and railways if Trump asks him to, adding that the plan “could relieve America’s burden.”

Trump’s response to this was not revealed by the Blue House.

In turn, spokesman Kim quoted Trump as saying he looks forward to meeting Moon in person, because he will have to convey the successful results of the upcoming Hanoi summit. Trump also said that as soon as the summit is over, he will call Moon to inform him about the summit results.

According to Kim, Moon told Trump, “I express my respect [to you], President Trump, for seeking a diplomatic strategy to build a permanent peace regime and denuclearize the Korean Peninsula [while] overcoming the failed diplomacy of the past 25 years of negotiating [with Pyongyang], during which no accomplishment was made and North Korea’s nuclear and missile capability only strengthened.”

Moon said he looked forward to seeing the Hanoi summit serve as a “great turning point” for specifying ways toward “complete denuclearization,” the establishment of a peace regime on the Korean Peninsula and the improvement of North-U.S. ties.

Trump explained to Moon about the preparations coming along for the Hanoi summit and stressed that South-U.S. relations were better than ever, according to Kim.

The White House did not reveal the details of the telephone conversation as of Wednesday press time.

An earlier remark from Moon hinted that the Mount Kumgang tour packages could be the first South-North economic project to restart.

During a meeting with religious leaders at the Blue House on Monday, Moon said he hoped the government supported the Jogye Order of Korean Buddhism’s plan to operate a temple stay program at Mount Kumgang’s Shingye Temple in Kosong County, Kangwon Province, just above the inter-Korean border.