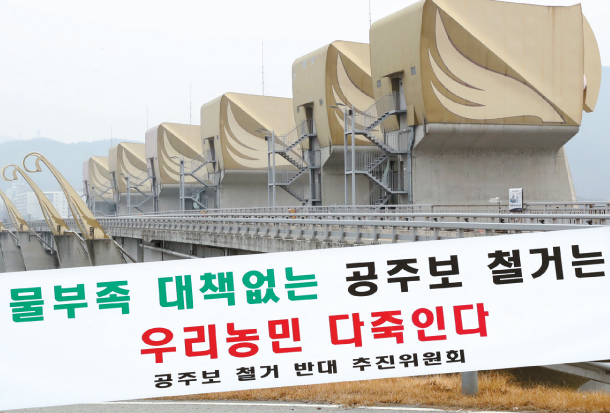 A sign opposes the dismantlement of the Gongju Weir on the Geum River in South Chungcheong on Friday. [NEWS1]

An Environment Ministry investigation committee announced Friday that three out of the five weirs on the Geum and Yeongsan rivers should be scrapped to improve water quality and the surrounding ecosystems.

The weirs had been constructed as part of the controversial four-rivers restoration project of the conservative Lee Myung-bak administration, which was in power from 2008 to 2013. The conservative main opposition Liberty Korea Party (LKP) denounced the ministry’s evaluation on Friday, saying the Moon Jae-in government was playing politics to undermine the former conservative government.

The committee will survey public opinion throughout the coming weeks and officially submit the results of its findings to a national water management committee that is set to launch this June, according to the ministry.

The Environment Ministry’s investigative committee had its roots in an order personally handed down by Moon in late May 2017, shortly after he became president through a snap election. In the order, Moon called for a thorough audit into the decisions and implementations of the four-rivers restoration project, Lee’s main environment initiative.

An aide of Moon who briefed Blue House correspondents about Moon’s order at the time said that the project was “bulldozed through in a hasty way.”

A key pillar of Lee’s green growth campaign, the project revolved around the plan to restore and develop Korea’s four main rivers - the Han, Yeongsan, Geum and Nakdong. It cost 22 trillion won, at the time about $19 billion. It was intended to clean up rivers, reduce floods and droughts, develop riverside leisure facilities and prevent green algal blooms ahead of summertime.

The four-rivers restoration project began in 2009 and was declared complete in 2011. In total, 16 weirs, five dams and 96 reservoirs were built.

The project drew fierce backlash from environmentalists who blamed it for greater algal blooms in the summers. Lee’s detractors often cite the project as a huge waste of tax money. The Environment Ministry’s investigative committee was launched last November. The fate of the other 11 weirs scattered across the Han and Nakdong rivers will be announced toward the end of this year, the committee said.

In a press briefing held at the Central Government Complex in central Seoul on Friday, the committee said the weirs in Sejong and Gongju on the Geum River should be demolished, as well as the Juksan Weir on the Yeongsan River. Geum River mainly flows through the southwestern Jeolla and central Chungcheong regions, while Yeongsan River passes through South Jeolla and Gwangju. But the committee advised that the Gongju Weir be taken down only partially to guarantee that a bridge is used for traffic stays.

The two other weirs on the Geum and Yeongsan rivers should be opened at all times, the committee advised. The committee said scrapping the weirs will improve water quality and river ecosystems and also save tax money because dismantling them would cut operation and maintenance expenses.

Gongju residents fumed, saying they would lack water for their farms if the Gongju Weir is torn down. Some Sejong residents feared their apartment prices will sink because the Sejong Weir guaranteed a good view of the river from their windows.