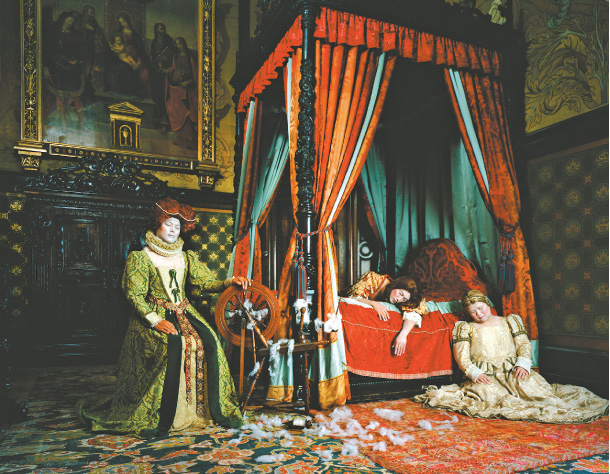 “Existing in Costume Sleeping Beauty” (2009), a photograph by London-based Korean artist Chan-hyo Bae, is included in his first book recently published by the Museum of Photography in Seoul. Bae, 44, elicited sensation with his mise-en-scene and portrait photos in which he placed himself in old European female costumes. [THE MUSEUM OF PHOTOGRAPHY]

The first book of photography by London-based Korean artist Chan-hyo Bae has been published by the Museum of Photography, eastern Seoul.

Bae, 44, is well know for his “Existing in Costume” series, a group of elaborate mise-en-scene and portrait photos, in which the artist himself poses in old European clothing for women, restaging folktales and Tudor history. The series explores Western cultural stereotypes and alienation based on what Bae experienced as an Asian man in Britain.

The title of Bae’s book is the same as the series and it includes 52 photos in five categories. The first four are sub-series of “Existing in Costume.”

The categories are “Self-Portraits,” which show Bae in women’s clothing he loaned from museums, ranging from a medieval robe to a 19th-century empire dress; “Fairy Tales” in which he recreates scenes from “Cinderella,” “Snow White” and others with himself playing the princesses; “Punishment,” in which he appears as kings and queens who were executed, such as Mary, Queen of Scots; and “Witch Hunting,” in which he appears as a witch in a forest of mystic ambience. 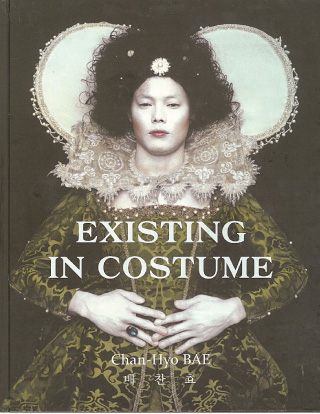 Born in Busan, Bae graduated from London’s Slade School of Fine Art in 2007. In several notes, he said the “Existing in Costume” series drew its inspiration from his sense of being estranged and excluded as a foreign student in Britain. The photo project is part of his effort to understand Western culture, which he only learned about in theory in Korea.

“Similar to the ways Western philosophers and anthropologists chose to analyze cultures foreign to them by designating them as ‘the Other,’ in an inversion of ‘Western’ norm, Chan-hyo Bae reverses the perspective by examining ‘the West’ as ‘the Other’ from his personal, non-Western, point of view,” wrote photography critic and curator Bill Kouwenhoven in the book “Existing in Costume.” 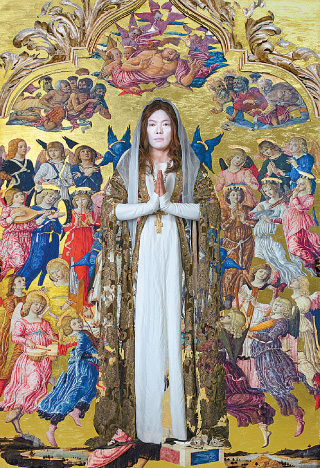 Bae’s new book covers his five photography series, including the latest “Jumping into the Oil Paintings,” left. “The Assumption of the Virgin - Matteo di Giovanni”(2018) is one of the works in the new series, right. [THE MUSEUM OF PHOTOGRAPHY]

But, why women’s clothing? Bae once said it is “to express existence as another person.” He also said he portrays “not women but the other gender who are not men,” in his works.

Art critic Kim Hong-hee pointed out that the East was perceived as “the Other” by Western men, but women were also seen in the same way, so the female is a metaphor for the East. She also points out Bae never exaggerates or caricatures femininity in his works but maintains “distance from the viewers with a blank face with cold posture.”

Based on Kouwenhoven’s and Kim’s writings, Bae’s works can be read as his agender self-portraits as the combination of women, Asian men and all “the Others” alienated and colonized in mainstream Western culture.

The last category in the book is the “Jumping into the Oil Paintings” series, in which the artist places himself at the center of paintings by Western masters from the collection of the National Gallery in London.

The book can be found at the Museum of Photography, eastern Seoul. It will be also released in London with Bae’s new solo show at Purdy Hicks Gallery in London staring on March 8.