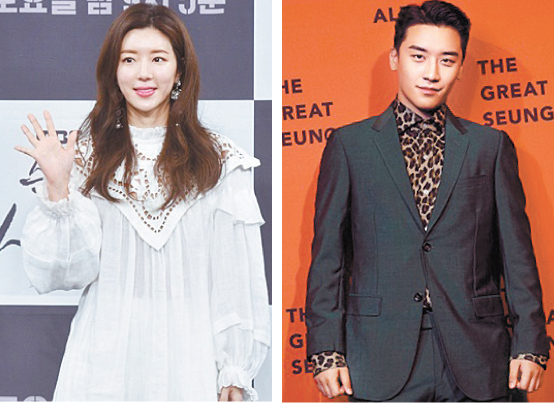 A club previously owned by Seungri of Big Bang, right, is under investigation for selling drugs and bribing police. Actor Park Han-byul’s husband is said to have been Seungri’s business partner. [MBC, YG ENTERTAINMENT]

While investigations found evidence of ties between the police and Burning Sun — a club in Gangnam previously owned by singer Seungri of Big Bang — the prosecution has decided not to arrest the police officers suspected of taking bribes from the club.

On Saturday, the prosecutors let a police officer surnamed Kang and a businessman surnamed Lee go free, instead of issuing arrest warrants, because there is “not enough evidence” yet, according to prosecution.

Burning Sun first entered the news in January, as reports broke that a 29-year-old man named Kim Sang-gyo was allegedly beaten up at the club by staff in November. Kim was reportedly trying to help a woman that was being sexually harassed.

According to Kim, the police didn’t even enter the club or demand to look at their surveillance camera footage. Instead, they handcuffed him and took him in for assault and sexual harassment, even beating him in the course of the arrest.

The case immediately made headlines because the club was owned by Seungri and he had claimed that he “actually ran the business” on television. Once investigations began, allegations emerged that the club had been selling illegal drugs to its VIP guests for them to use on women, and that the Yeoksam Police Precinct had turned a blind eye when guests of the club reported such cases to the police.

The police’s investigative force arrested police officer Kang on Feb. 21 and took him in so that he couldn’t destroy evidence. Under the current law, the prosecution must issue an arrest warrant within 48 hours of an emergency arrest for it to be deemed legal. The police will file another request for the warrant.

A former police officer surnamed Lee, who now owns a cosmetic company, was arrested along with Kang. He is suspected of being the middle man between the club and the police. Lee is said to have held a promotion event for his company on July 7, when a minor entered the club and was reported to the police. The police station closed the case on “lack of evidence” in August, but recent investigations found that two officers had been paid 2.3 million won ($2,050) shortly after the initial report.

Police raided Burning Sun and the Yeoksam Precinct on Feb. 14. Burning Sun, on Feb. 17, announced that it will shut due to the growing controversy and started demolishing the venue on that same afternoon. Police halted the demolition on Feb. 20 because evidence could be destroyed.

Although the club was famous for being owned and directed by Seungri, he stepped down from his position just shortly before the news broke because the law required him to do so before he enters the military in March or April. Fans threatened to boycott his concerts, “Seungri 1st Solo Tour The Great Seungri Final In Seoul,” scheduled for Feb. 16 and 17, but he still performed and apologized for being irresponsible.

“I failed to take proper responsibility when it first happened,” said Seungri on Feb. 16. “I tried so hard to give joy to you. But I’m so sorry that I let you all down. I will be taking in all the criticism and scolding deeply in my heart.”

Seungri has not yet been called in by the police, but he is on the investigation list.

Meanwhile, earlier on Friday, reports revealed that actor Park Han-byul’s husband was the co-owner of Yuri Holdings, the company behind Seungri’s businesses, such as his ramen restaurant, lounge bar, investment company and allegedly Burning Sun as well.

Although Park admitted her husband was Seungri’s business partner, she does not know anything other than that.

“He did work as Seungri’s partner, but that’s my husband’s private life which I cannot know the details of,” said Park through her agency.
Park married her husband, surnamed Yu, in 2017. The name Yuri Holdings is supposed to be made up of Yu’s surname and the last syllable of Seungri’s stage name.