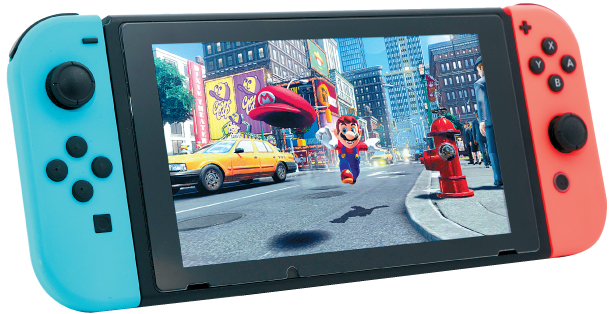 Super Mario Odyssey is one of the most popular games that can be played on the Switch. [NINTENDO KOREA]

Nintendo, the Kyoto-based game company, is back.

After almost disappearing over the past decade in the storm of mobile and online games, it is returning to the market with Switch, a retro console that marries the latest technology with old favorites, like Pokemon.

A 41-year-old surnamed Kim, a father of three, recently found his new favorite hobby: playing Switch. His two favorite games are Diablo 3 and Legend of Zelda: Breath of the Wild, both of which he used to enjoy years ago at attending university.

He now plays the latest versions.

“To advance to a higher level on smartphone games, I have to spend a lot of time and money, so I lost interest,” said Kim. “As for Switch, it’s like the games I played when I was younger. Just like arcade games, I can save the game and can continue playing it where it ended whenever I want. Also, the game itself is not too difficult.”

Plenty of people seem to agree with Kim.

Global sales of Switch from its introduction in March 2017 through late 2018 totaled 32.27 million units, according to a report from Nintendo. On average, 33.5 Switch consoles have been sold per minute. A total of 163.61 million Switch titles were bought during the same period.

The Switch ended 2018 as the year’s best-selling hardware platform both in unit and in dollar sales terms, according to a report from NPD Group, a U.S.-based market-research company. Both in units and dollars, the Switch was the best-selling game since Sony PlayStation 4 in 2015.

The Switch boom is evident in Korea, where consoles are not generally very popular. The product has been generating 51 percent of game sales at Emart, the main marketing channel for Switch.

According to a report from Korea Creative Content Agency (Kocca), the size of the console game market in Korea grew by 42.2 percent from 2016 to 2017. Sales of Switch - which totaled more than 110,000 units in the first month of its release in Korea in December 2017 - and the rise of the related software sales were major contributors to the game market expansion, the report argues. 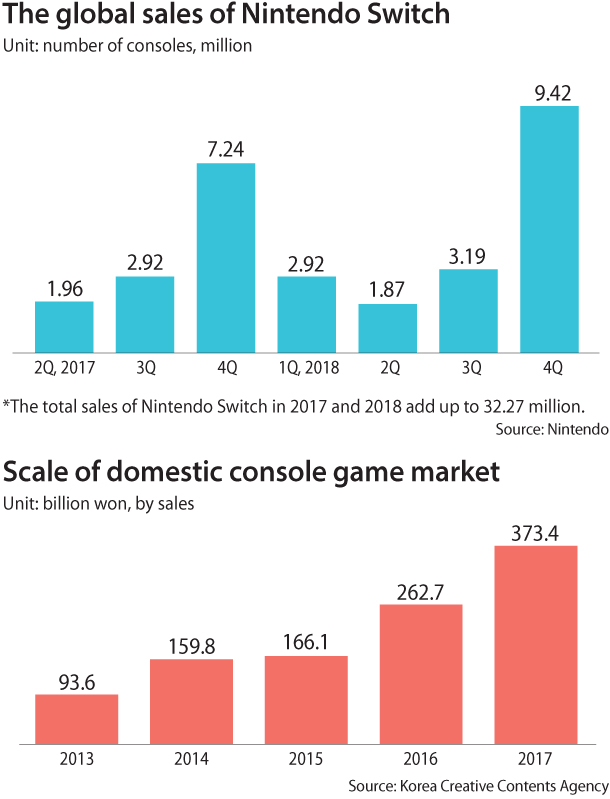 Nintendo, which was founded in 1889 as a playing-card company, most recently became an icon of innovation around year 2000 when it introduced Nintendo DS and Wii. Each sold more than 100 million units, and the strong sales in Korea led to the development of similar games locally.

The success was short lived. The market began to change around 2010 as smartphone games started to develop and lead the market. In 2011, Nintendo experienced its first annual earnings loss since it was listed on the stock exchange in 1983.

The company sought a rebound the following year with the Wii U, but only 13 million units were sold.

Nintendo suffered losses for three years, and its presence in the console game market gradually waned with the dominance of the Sony PlayStation 4 and Microsoft’s Xbox. Nintendo’s share price dipped to as low as 8,060 yen ($73) from its November 2007 peak of 70,500 yen. The company’s weak performance continued until 2016, when Nintendo shook the game world with Pokemon Go, its wildly popular augmented-reality smartphone game.

The comeback was confirmed with the release of Switch the following year.

Popular with young and old

Nintendo’s timing couldn’t have been better. It released Switch just as the newtro trend was gaining ground. Newtro, a portmanteau of new and retro, is reviving many long-dormant styles and products.

The most popular titles in the early days of Switch - Super Mario Odyssey, Legend of Zelda and Pokemon: Let’s Go, Pikachu! - are the latest versions of classic games that people now in 30s and 40s used to enjoy when younger.

“Switch looks very similar to the portable arcade games that people now in 30s and 40s first used in their childhood,” said researcher Jang Min-ji from Kocca. “As the generation that grew up with these games now has purchasing power, similar games are bought by people in that generation.”

“Even younger people - those in their teens and 20s - who have never experienced these games, are finding Switch refreshing in that unlike smartphone and traditional console games, users can carry it around and play it while in bed, not to mention connect the games to television. Such charms of Switch have captivated people across age groups,” Jang said.

“It has become a new trend for people in their 30s and 40s to reminisce about their past, while the younger generation fulfills their fascination for the newtro style,” said Kim Gyeong-geun, a merchandiser at a local toy seller, Toy Friends.

Another key contributor to the growing demand for classic games is the gradual loss of interest in mobile games, which dominated the local market over the past several years. Players are growing tired of the free-to-play model, which is employed by the majority of mobile massively multiplayer online role-playing games (Mmorpg).

With free-to-play mobile games, players can download the game either for free or at a low price, but they are compelled to spend more to improve the gaming experience.

In a report on the success of Switch, Lee Taek-su from KB Research wrote, “In the past, most people did not agree with the idea of spending money on console game software that costs between 50,000 won [$44.40] and 60,000 won, since they could easily play mobile games for free or for around 1,000 won to 2,000 won. But as a growing number of players start to have the experience of spending much more cash on mobile games, their perceptions have started to change.”

The diversity of games that could be interesting to people of different ages and gender, and the fact that these games can be enjoyed by multiple people at once through the connection of hardware, are few reasons Switch is gaining popularity.