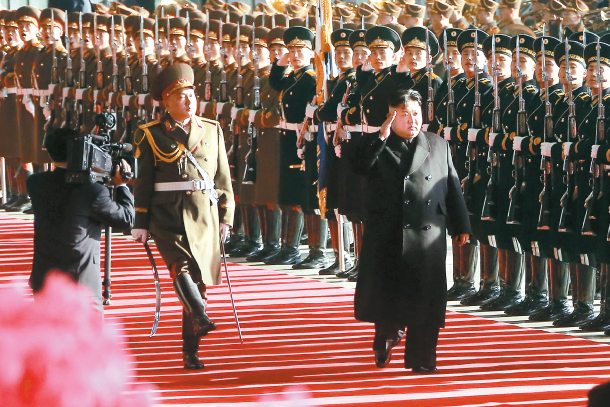 North Korean leader Kim Jong-un, center, attends a ceremony to see him off at Pyongyang Railway Station on Saturday afternoon, in a photo provided by the Korean Central News Agency (KCNA) on Sunday. Kim left by train for Hanoi, Vietnam, for a second summit with U.S. President Donald Trump on Feb. 27 and 28. [YONHAP]

The North Korean entourage is expected to travel 4,500 kilometers (2,796 miles) by land and take up to 60 hours to reach Hanoi, Vietnam, where Kim will hold an official visit and a two-day summit with Trump to reach some sort of denuclearization deal in return for corresponding measures to ensure the North’s security. The journey would have taken roughly five hours if Kim had flown.

The KCNA reported that Kim left “for the second DPRK-U.S. summit meeting and talks to be held in Hanoi, the Socialist Republic of Vietnam, from Feb. 27 to 28,” referring to North Korea by the acronym for its official name, the Democratic People’s Republic of Korea.

The North’s Rodong Sinmun likewise covered Kim’s departure for the summit in detail on its front page Sunday.

This marked the first time North Korea has officially acknowledged through its state media the second North-U.S. summit in Hanoi this week. The North Korean leaders’ overseas trips are routinely kept secret as they happen. Ahead of the first North-U.S summit, Kim’s departure on June 10 was only made officially public the following day after his arrival in Singapore.

Kim was also accompanied by North Korean Minister of the People’s Armed Forces No Kwang-chol and Vice Foreign Minister Choe Son-hui, as well as Kim Phyong-hae and O Su-yong, members of the Political Bureau and vice chairmen of the Central Committee, and members of the State Affairs Commission.

However, Kim Jong-un’s wife, Ri Sol-ju was excluded from the entourage, despite expectations of a possible first lady’s meeting with Melania Trump in Hanoi. The two first ladies did not take part in the previous North-U.S. summit in Singapore on June 12.

The KCNA reported that senior officials of the Workers’ Party, government and military saw Kim and his entourage off at the station and “sincerely wished” Kim “good success in the second DPRK-U.S. summit meeting and talks, and safe return.”

Top officials at the station included the North’s nominal head, Kim Yong-nam, and Choe Ryong-hae and Pak Pong-ju, members of the Presidium of the Political Bureau of the Central Committee.

The KCNA also reported that Kim will make an “official goodwill visit” to Vietnam at the invitation of Vietnamese President Nguyen Phu Trong, and that the two leaders “will hold a meeting and talks.”

Kim’s armored train, green with yellow stripes, was spotted crossing into Dandong, a border city with China, Saturday night. The train was spotted at Tianjin Station around 1 p.m. Sunday. The station was seen to have heightened security ahead of the arrival.

The train is expected to arrive at Dong Dang, a city in Vietnam’s northern Lang Son Province bordering China, on Tuesday. Kim is expected to travel to Hanoi by car from there.

Local media reported that traffic will be banned on a 170-kilometer stretch of highway linking Dong Dang to Hanoi between 6 a.m. and 2 p.m. Tuesday.

A 100-person North Korean security team was reported to have arrived on the plane, expected to protect leader Kim during his Vietnam trip.

North Korean and U.S. working-level teams have been ironing out final logistics and agenda details in Hanoi since last week.

Stephen Biegun, the U.S. special representative for North Korea, was seen looking upbeat on Sunday leaving his lodgings in Hanoi, the Hotel du Parc. He has been holding talks with his North Korean counterpart, Kim Hyok-chol, who works for the North’s State Affairs Commission, since Thursday. While he has been avoiding questions on the meetings, he gave reporters a thumb’s up on Saturday afternoon following talks with Kim.

U.S. officials have indicated Washington may press for a freeze on all weapons of mass destruction (WMD) and missile programs and a “roadmap” toward complete dismantlement.

In a statement issued Thursday, the White House said Trump “has made clear that should North Korea follow through on its commitment to complete denuclearization, we will work to ensure there are economic development options.”

It went on to state that the United States is “prepared to explore how to mobilize investment, improve infrastructure, enhance food security, and more.” However, it also emphasized “that the world would not accept a nuclear-armed North Korea.”

North Korea’s advance team has also been scouting industrial and tourism centers that may be visited during their leader’s visit to Hanoi.

Kim Chang-son, an official at the North’s State Affairs Commission, has been spotted around hotels and other venues in Hanoi over the past week, checking possible summit locations and lodging candidates. The Melia Hanoi hotel has been named as a top candidate for Kim’s lodgings, located close to the North Korean Embassy in Vietnam. Kim was spotted Sunday visiting the Sofitel Legend Metropole Hanoi, a possible summit venue.

The White House has yet to announce Trump’s departure for Hanoi, though Axios reported he will depart Monday, citing U.S. administration sources, at the same time Vice President Mike Pence will be overseas. On Friday, John Bolton, the U.S. national security adviser, canceled a planned trip to Seoul in order to address the ongoing political crisis in Venezuela but is expected to attend the summit in Hanoi.

Vietnam’s Foreign Ministry says 2,600 members of the foreign press have registered to cover the summit.