Korea has the highest proportion of women among OECD countries considered underpaid. It also has the widest gender pay gap in the grouping. 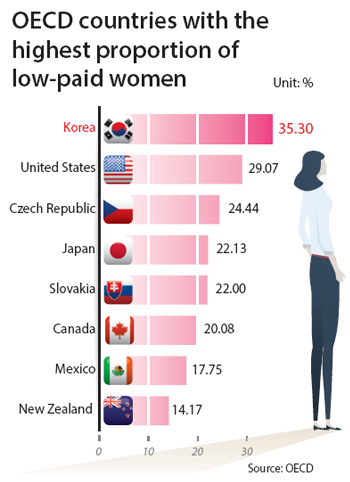 The OECD defines “low pay” as earning less than two-thirds of the gross median earnings of all full-time workers.

In the latest report by the OECD, released on Monday, 35.3 percent of Korean women earned less than two-thirds of the median in 2017. The country was followed by the United States, at 29.07 percent. The OECD’s overall average is 20.01 percent. Other countries with a significant portion of women considered low paid were the Czech Republic and Japan.

European countries - such as Finland, Italy and Belgium - did well in the survey, with fewer than 10 percent considered low paid.

The OECD explained that many Korean women end up with less pay than men after a hiatus in their careers following pregnancy.

“When women leave work, temporarily or permanently, as is common in Korea, these career interruptions can also contribute to gender gaps in pension entitlements and consequent impacts on older women’s poverty levels,” it said.

“Workplace culture and social expectations can still pressure women to withdraw from the labour force, and it can be difficult for mothers returning to well-paid regular employment and resume their careers.”

The gender pay gap in Korea is also the highest in the OECD, as women working in the country earn only 63 percent of what men earn.

The Bank of Korea, the country’s central bank, also noted the role of motherhood in decisions related to participation in the workforce in its report in 2018.

“There is a growing number of women giving up their jobs at around 30 because of marriage and childbirth and child-rearing issues,” said Kim Sang-woo, economist in the Bank of Korea’s research department.

The report said Korea has the fourth-highest gender gap in terms of labor force participation among member countries of the OECD, primarily due to the large number of married Korean women who quit their jobs after giving birth.