KT CEO tells MWC what 5G is already capable of

KT CEO tells MWC what 5G is already capable of 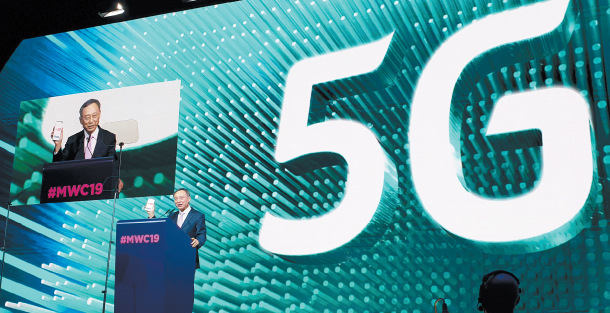 KT CEO Hwang Chang-gyu delivers a keynote speech on “Now a Reality, KT 5G and the Next Intelligent Platform” during MWC 2019 that took off Monday in Barcelona, Spain. [KT]

BARCELONA, Spain - Hwang Chang-gyu, CEO of mobile carrier KT, laid out the capabilities of the new 5G network during his keynote speech at MWC 2019 in Barcelona on Monday.

It was his third keynote speech at MWC, one of the world’s biggest mobile fairs, all of which have been dedicated to 5G.

Under the title “Now a Reality, KT 5G and the Next Intelligent Platform,” Hwang emphasized that the new network can be used to make a better and safer society.

Hwang’s speech kicked off with a video showing firefighters using 5G-connected wearable neckband cameras that are able to send a 360-degree video to a control tower in real time to make rescues faster and more precise.

“5G’s massive connectivity will ensure distribution of benefits from the fourth industrial revolution to all industries and all individuals fairly and economically.”

The hyperconnectivity will not only be a core element for autonomous cars, but will also play a supplementary role in rescuing passengers in the case of an accident.

Hwang said KT is currently testing out what’s called the “Emergency Remote Control Feature,” which switches the car to an autonomous mode in case of an emergency, transports passengers to a safe place and calls 911, all on its own.

The CEO mentioned Hyundai Heavy Industries, which uses the 5G network at its 7 million-square-meter (1,730-acre) shipbuilding complex to spot and fix errors through connected CCTV and AR glasses.

The costly service will be made available for small and midsized firms as well, according to Hwang.

“We have developed the ‘5G Smart Factory as a Service’ on a pay-as-you-go basis,” he said.

The pay-as-you-go basis means that SMEs only need to pay for the 5G data that they have actually used, rather than a one-size-fits-all approach.

Hwang also mentioned various preventive measures to any possible network failure, one of the biggest fears for the looming 5G era.

Hwang’s ambition for KT’s 5G network has been no secret.

At the World Economic Forum earlier this year, Hwang said in a speech that Korea has a leading position in 5G technology compared to the United States and China.

In his MWC 2017 keynote speech, made under the title “New World Beyond 5G,” Hwang made a surprise announcement that he will enable the commercialization of 5G by 2019, a year earlier than the market estimation. That ambition was also reflected in the PyeongChang Winter Olympics last year, where KT demonstrated 5G technology.

“5G will become a new platform itself beyond an intelligent network,” Hwang said.