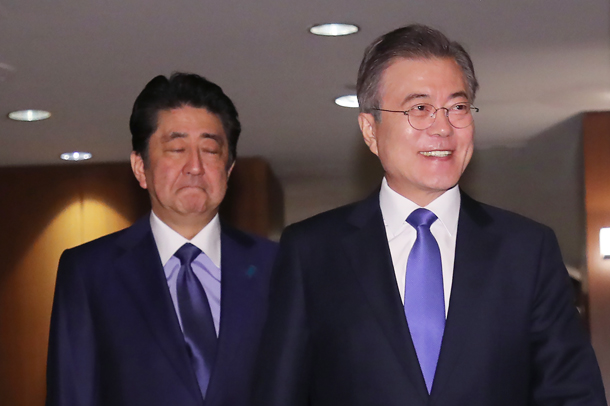 President Moon Jae-in and Japanese Prime Minister Shinzo Abe head to a meeting at a hotel in New York on the sidelines of the United Nations General Assembly meeting last September. [YONHAP]

President Roh Moo-hyun and Japanese Prime Minister Junichiro Koizumi’s terms overlapped for three years and seven months. After an early honeymoon period, the two leaders almost became enemies during Koizumi’s Yasukuni Shrine visit and the history textbook controversy. Koizumi visited the shrine, where war criminals are honored, six times while in office, including on August 15, 2006, at the end of his term.

While Korea-Japan relations were at what was considered their worst, the two leaders were confident they could at least talk. In his first year in office, President Roh visited Japan and made shuttle diplomacy possible. They had a one-on-one meeting without reporters — only accompanied by interpreters — for over an hour. President Roh believed they needed to meet when the challenge became serious. While they snarled at one another, they understood each other’s need to take the domestic political situation into account. President Roh said he was envious of the prime minister’s power to dissolve the parliament as Koizumi pursued the privatization of Japan’s postal service. In fact, Koizumi was envious of the Korean president, whose five-year term was guaranteed.

How about President Moon Jae-in and Japanese Prime Minister Shinzo Abe? Unfortunately, the two leaders haven’t had a proper summit. While they have had summits at multilateral conferences, they have not invited one another to discuss bilateral issues. Moon’s only visit was when he went to Tokyo to attend a Korea-China-Japan summit last May. Similarly, Abe only came to Korea to attend the opening ceremony of the PyeongChang Winter Olympics in February.

Some say there is no problem between the two leaders. They have had 17 meetings — including telephone conversations — which is a great improvement compared to the previous administration. Last year, the number of people traveling between the two countries exceeded 10 million for the first time. As there is no indicator suggesting aggravating economic relations, it may seem that the Korea-Japan relationship is working just fine.

But the current Seoul-Tokyo ties are abnormal. I want to compare them to a doughnut, where the central summit diplomacy is hollow and the periphery is working. A relationship whose center is not solid can be shaken by just a small crack. I am concerned a relationship without any centripetal force could break someday. If the communication between the two leaders is smooth, the reason why the Japanese government keeps throwing a wet blanket over denuclearization discussions cannot be explained. Cooperation between neighbors is desperately needed at this moment.