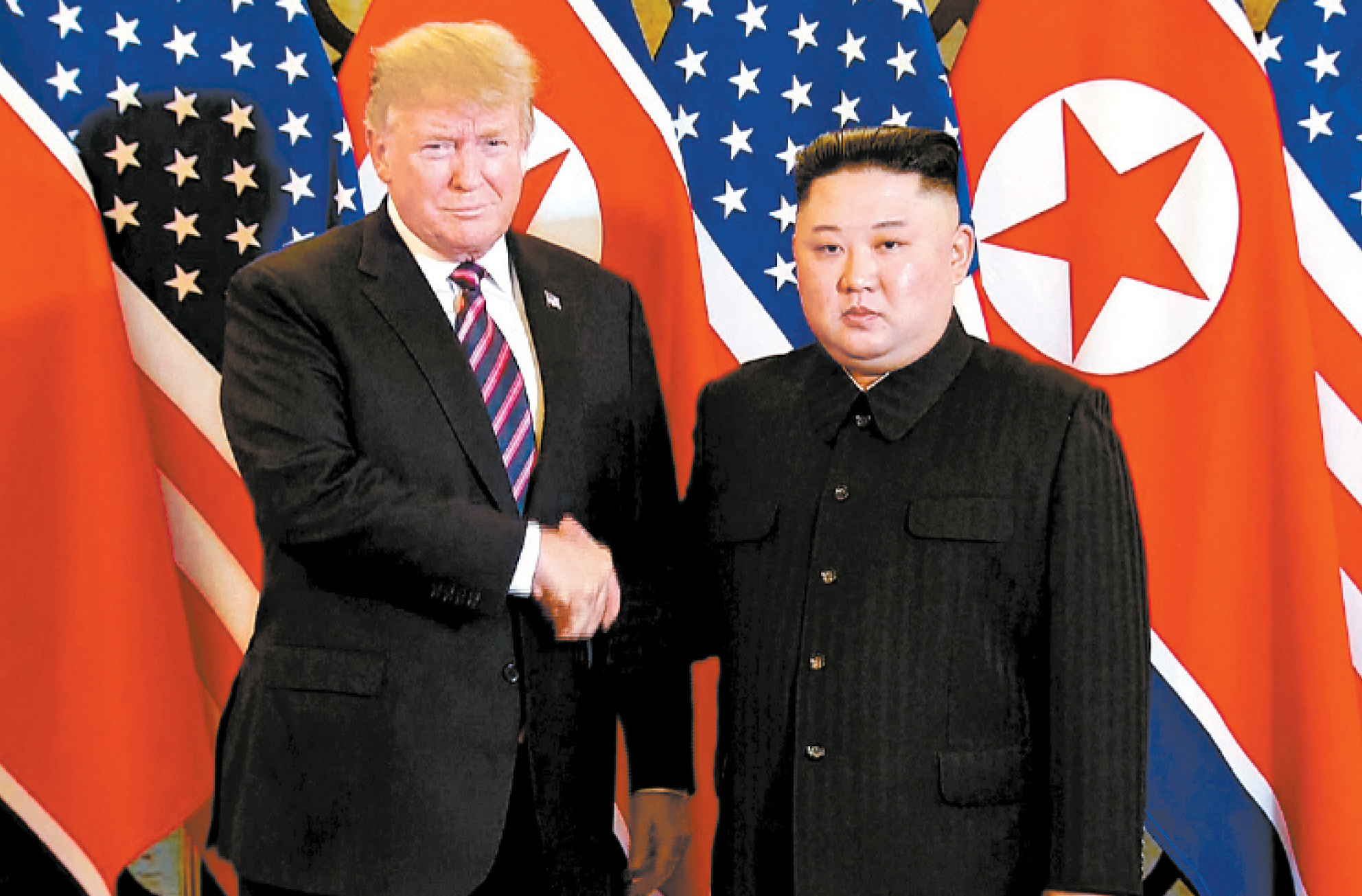 The two leaders reunited after eight months with a handshake at the French colonial-era Sofitel Legend Metropole Hanoi at around 6:30 p.m. amid heightened security in Vietnam’s capital.

Trump arrived first to the hotel with his convoy at around 6:15 p.m. Kim’s motorcade arrived minutes later.

After greeting each other with a handshake, Kim and Trump posed for photographs in front of a backdrop of North Korean and U.S. flags, similar to their historic first meeting in Singapore, and smiled at each other. Trump also put his hand on Kim’s shoulder briefly. Trump told reporters that he believes the second summit is “going to be very successful.”

The two leaders then sat down for remarks open to the press.

Trump said he expects as much success from the second summit as he did from the first and told Kim, “I think your country has tremendous economic potential,” conveying a vision of a bright future, and said “we will help it to happen.”

Kim reflected on overcoming obstacles, and said that the past 260 days were a period in which “agonizing, effort and patience was needed more than any time before.”

Trump and Kim were scheduled to meet for around two hours, with 20 minutes allotted for one-on-one talks and then a “social dinner” accompanied by two close aides and interpreters, according to the White House.

U.S. Secretary of State Mike Pompeo, who has helmed North Korea diplomacy efforts, and Mick Mulvaney, the White House chief of staff, accompanied Trump to his first dinner with Kim, which is expected to set the stage for the second day of the summit. Kim Yong-chol, a vice chairman of the North’s ruling Workers’ Party’s Central Committee, who also oversees inter-Korean affairs, and North Korean Foreign Minister Ri Yong-ho accompanied Kim Jong-un.

The two leaders did not have dinner together during the first North-U.S. summit in Singapore on June 12, which was a one-day event held on Sentosa Island. Kim and Trump will meet again today for one-on-one and extended meetings, a luncheon and a signing ceremony for a joint statement in a similar pattern to their first summit.

However, the two leaders could also have a surprise event like they did during the first summit, where they took a stroll outside the grounds of the Capella Hotel before signing a joint statement. Trump even showed Kim the interior of the presidential Cadillac limousine, known as “The Beast.” After the first summit, Trump immediately held a solo press conference. It remains to be seen if Kim may join him this time around.

Ahead of the summit, Trump arrived in Hanoi on Air Force One around 9 p.m. Tuesday night. He was greeted by Vietnamese officials and press at Noi Bai International Airport and headed straight to the JW Marriott Hotel, where he is staying.

At around 11 a.m. Wednesday, Trump met with Vietnamese President Nguyen Phu Trong at the Presidential Palace to discuss bilateral issues and trade deals. Afterward, he held a working lunch with Prime Minister Nguyen Xuan Phuc at the Office of Government Hall.

During the bilateral meeting with the president, Trump thanked Vietnam for its “hospitality” in agreeing to host the second North-U.S. summit and lauded the Southeast Asian country’s thriving economy.

Trump said, “We have a very big dinner tonight and meetings with North Korea and Chairman Kim, and we both felt very good about having this very important summit in Vietnam because you really are an example as to what can happen with good thinking.”

Trump has often offered the North a vision of economic prosperity and potential investments in the country as an incentive for Pyongyang to denuclearize quickly.

Earlier that morning, Trump tweeted: “Vietnam is thriving like few places on earth. North Korea would be the same, and very quickly, if it would denuclearize. The potential is AWESOME, a great opportunity, like almost none other in history, for my friend Kim Jong Un. We will know fairly soon - Very Interesting!”

He tweeted again in the afternoon: “Kim Jong Un and I will try very hard to work something out on Denuclearization & then making North Korea an Economic Powerhouse. I believe that China, Russia, Japan & South Korea will be very helpful!”

Trump returned to his hotel and stayed there for the next several hours, as did Kim Jong-un, who after arriving in Hanoi earlier Tuesday kept things low-key. Though Kim made an hour-long visit to the North Korean Embassy in Hanoi Tuesday evening, he spent most of his time in the hotel ahead of his talks with Trump.

Kim was briefed by his key negotiators before the summit at the Melia Hotel, where the North Korean delegation is staying, on Tuesday. The officials who briefed him included Kim Hyok-chol, a diplomat with the North’s State Affairs Commission who has been holding working-level talks with Stephen Biegun, the U.S. special representative on North Korea, and Kim Song-hye, director of the United Front Department’s tactical office. North Korean Foreign Minister Ri Yong-ho and Vice Foreign Minister Choe Son-hui also took part in the strategy meeting.

The North’s Korean Central News Agency (KCNA) on Wednesday reported that Kim “listened to the detailed report on the contact between the working delegations dispatched by the DPRK and the U.S. to Hanoi for the successful second DPRK-U.S. summit talks.” DPRK is the acronym for the North’s official name, the Democratic People’s Republic of Korea.

The KCNA released a photo which showed Kim seated at a small round table in a hotel suite while being briefed by his officials, all with pens and notes in hand.

Kim Hyok-chol and Biegun have been narrowing their differences in Hanoi for the past week to outline a more detailed roadmap toward denuclearizing North Korea in return for corresponding measures from the United States. However, because of the top-down approach of the negotiations, Kim Jong-un and Trump will have the final say on a deal that the working-level teams have been negotiating over the past weeks. Thus, there is interest to see what the Hanoi joint statement, set to be signed today, will reveal beyond what was outlined in the June 12 joint statement.

The four-point Singapore statement called for establishing new bilateral relations, building a lasting and stable peace on the Korean Peninsula, working toward complete denuclearization and recovering and repatriating the remains of American soldiers missing in the Korean War.

North Korea may offer to freeze or dismantle facilities at its key Yongbyon nuclear complex, which is also the site of its only plutonium-producing reactor as well as a uranium enrichment facility. But the United States may demand more measures in addition to the dismantlement of Yongbyon to enable easing of sanctions, as demanded by North Korea.

Online media outlet Vox on Tuesday reported that the United States would agree to lift some sanctions on North Korea and improve ties between the two countries in exchange for a commitment from Kim to close down Yongbyon, citing three sources familiar with the negotiations. North Korea could agree to stop producing materials for nuclear bombs at its Yongbyon complex, according to the report, and in exchange, the United States may agree to lift some UN sanctions on North Korea so it can pursue joint economic projects with South Korea.

This could include the resumption of tours to Mount Kumgang or even the reopening of the shuttered Kaesong Industrial Complex.

The deal may also include the reporting of Pyongyang’s addition nuclear facilities, Vox reported.

The two sides are also expected to sign a peace declaration to symbolically end the 1950-53 Korean War, which ended in an armistice, not a peace treaty. North Korea and the United States were also expected to establish liaison offices, considered a first step toward normalizing bilateral diplomatic ties.

South Korean President Moon Jae-in is expected to hold a phone conversation with Trump as early as this evening after the summit, according to the Blue House. In Seoul, Moon since Wednesday afternoon was focused on monitoring the North-U.S. summit and receiving briefings on the situation through various channels, including Chung Eui-yong, the Blue House national security adviser.