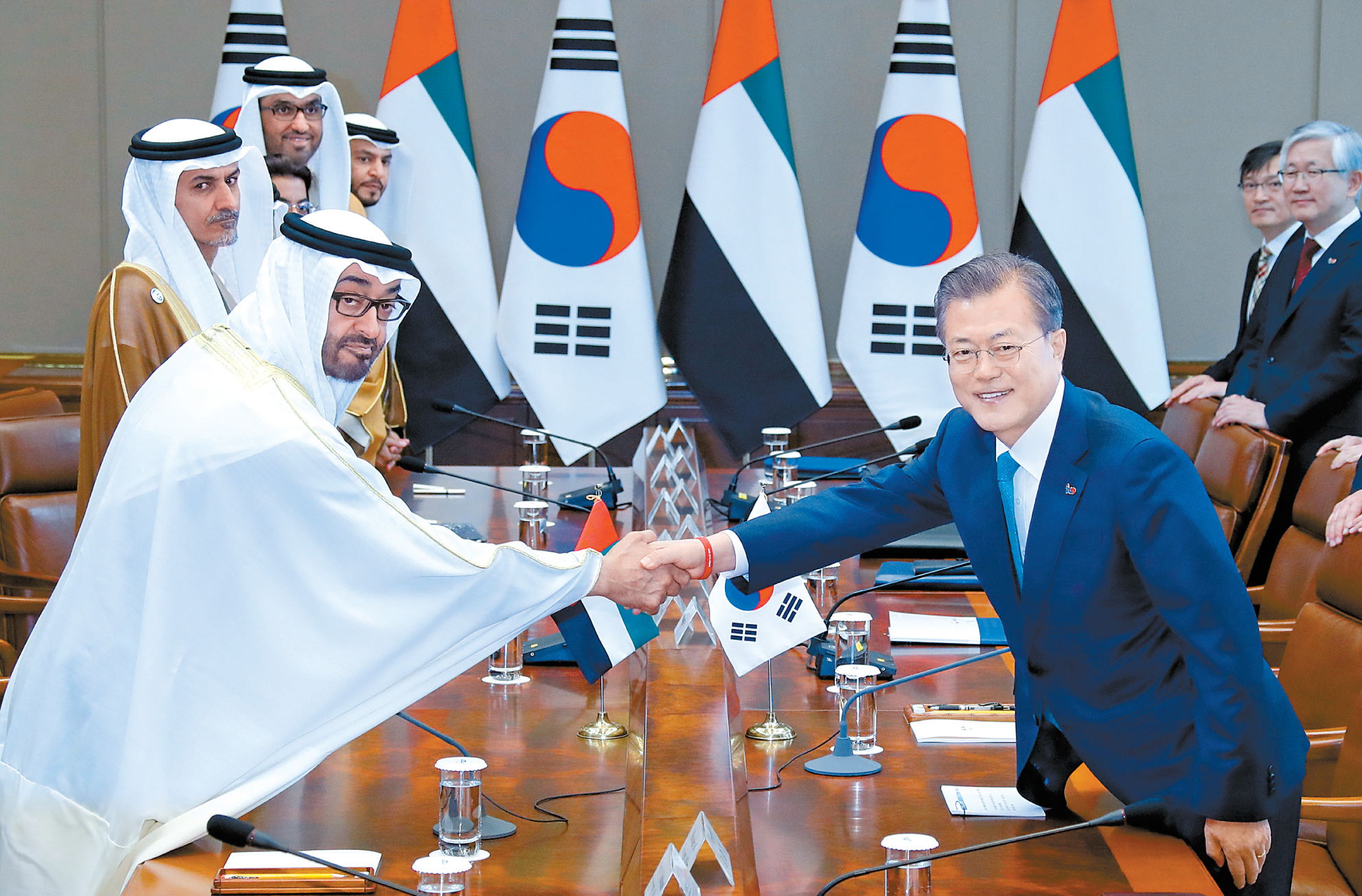 The leaders of South Korea and the United Arab Emirates (UAE) agreed Wednesday to further develop the countries’ relationship and expand their economic cooperation to agriculture, clean energy and information and communication technology.

In a summit held at the Blue House, President Moon Jae-in and Crown Prince of Abu Dhabi Mohammed bin Zayed Al-Nahyan noted that the countries’ bilateral relations have steadily improved since they established a special strategic partnership last year.

The de facto UAE leader arrived here Tuesday on a two-day official visit. His trip began with a brief visit to a production facility of Samsung Electronics, followed by a social dinner hosted by President Moon at the Blue House.

“I am pleased to see cooperation between the two countries expanding to various areas since we two leaders agreed to upgrade the countries’ relationship into a special strategic partnership in March last year,” President Moon said at the start of their bilateral summit, according to the Blue House pool reports.

“As a result, the UAE became the largest destination of our exports, construction projects and the most frequently visited nation in the Middle East last year,” the president added.

“I wish to expand the countries’ cooperation to new technologies and new industrial sectors that will prepare the countries for the fourth industrial revolution, such as 5G, information-communication technology, artificial intelligence, robots, semiconductors, renewable energy and smart farms,” he said.

“I came here today to seek ways to further strengthen the already special relationship between the two countries and promote further cooperation,” the UAE leader told Moon through his interpreter.

“South Korea is already an ally to the UAE that has a very special relationship,” he added, according to the pool reports.

Moon called for joint efforts to establish and promote peace in the region.

“Today also happens to be a very important day in efforts to ensure peace and prosperity on the Korean Peninsula with the second North Korea-U.S. summit set to be held in Vietnam,” he noted.

The UAE leader said his country will continue to actively support the efforts to establish peace on the Korean Peninsula, noting that peace on the peninsula may benefit not only South Korea but his country as well as those on the opposite side of the globe.

“Because the relationship between our two countries is so strong, what is important to South Korea is also very important to us,” he was quoted as saying.

Moon hosted an official lunch for the crown prince of Abu Dhabi after their summit.