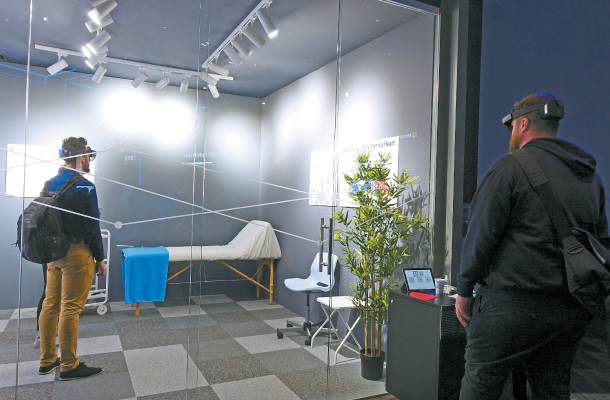 BARCELONA, Spain - Visitors to this year’s MWC could be largely categorized into two groups: those gazing longingly at foldable phones and those swinging their hands wildly in the air as they navigate their own virtual reality.

The attention on foldable phones is understandable - the long-awaited devices are finally here but the manufacturers have decided to keep them behind glass.

What was unexpected was the huge role that virtual reality (VR) and augmented reality (AR) headsets took at this year’s MWC. Considering that VR and AR gadgets have been widely available for a few years already, their prominence again this year comes as a surprise.

It was immediately apparent that the IT industry is once again banking on VR with the advent of the 5G era. The ability to process data 20 times faster than the current 4G network will allow for a far more realistic version of VR without the hassle of data-heavy connections to servers and computers.

“VR and AR haven’t had much to offer until now,” said Yoon Kim, an executive vice president at SK Telecom in charge of the company’s artificial intelligence (AI) center.

“However, just like smartphones, where various attempts were made without tangible outcomes until Apple came up with a clear definition, I believe the VR and AR industries have great potential in the future now that 5G will soon be commercialized. It is a matter of time.” 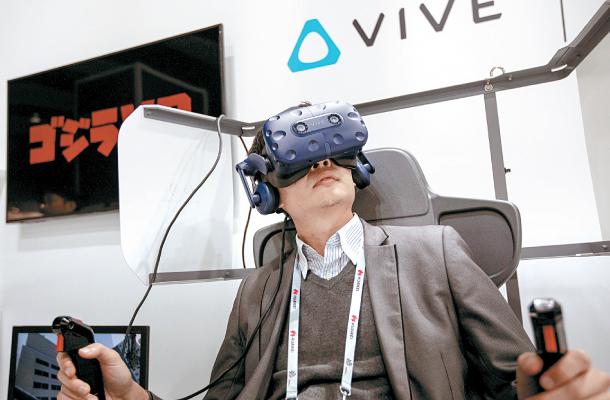 A visitor at the HTC booth experiences a version of the Taiwanese electronics company’s Vive virtual reality (VR) headsets. [AP]

At the mobile fair, Microsoft launched the second generation of its HoloLens AR glasses at one of the busiest booths in the hall.

When this reporter put on the headset, an ill-looking patient appeared on a bed in front of her. A virtual board showed her family history and evaluated her heartbeat and other factors to diagnose her illness. As the user reads through the diagnosis, the screen scrolls down on its own, tracking the movement of the user’s eyes.

This demo, in collaboration with education company Pearson, is used to train and educate medical students, according to a Microsoft representative.

U.S. chipmaker Qualcomm was another company betting big on VR.

Using its latest Snapdragon 855 processor, Qualcomm was betting on AR and VR headsets powered solely by a 5G smartphone. The demo at the booth used glasses made by Acer.

“All you need is a 5G phone to activate this headset,” said an official from Qualcomm at the demo booth. “You don’t need extra gadgets or devices. It’s very convenient, affordable.”

A cable that connects the phone to the glasses was all that was needed to launch a 360-degree VR game.

Taiwanese electronics company HTC also displayed its latest standalone VR headset Vive Focus Plus, which doesn’t need an extra station or computer to provide the content. It comes with two motion controllers so that users can interact with virtual elements.

Korean companies are also looking for new opportunities in VR and AR.

SK Telecom signed an exclusive distribution contract with Magic Leap, a leading headsets manufacturer, to bring AR headsets to Korea, although a specific timeline has yet to be revealed.

“With 5G, I believe the AR and VR industry will first prosper in the business to business segment,” said Kim Dong-ku, chairman of the 5G Forum and a professor of electronics engineering at Yonsei University.

“The connectivity is ready, I believe, but the gadgets have to be lighter and the content needs to be ready and available for wider use. I think widespread usage of VR and AR in our daily lives will be after 2023, when 5G becomes the norm worldwide.”