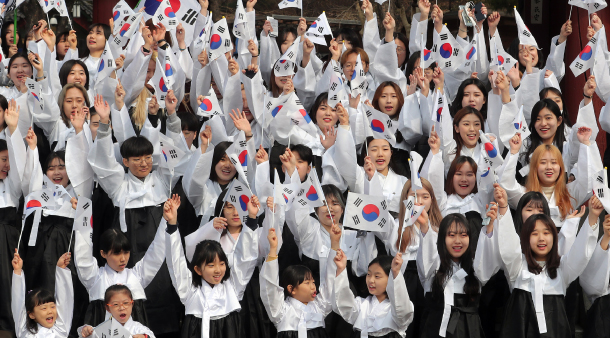 A massive event celebrating the centennial of the March 1 Independence Movement will be held this morning in downtown Seoul.

The Blue House hopes to see 10,000 people from all walks of life show up to mark 100 years since Koreans rose up against Japanese colonial rule.

In a press release on Thursday, the Blue House said the main event will begin at 11 a.m. in Gwanghwamun Square near President Moon Jae-in’s office. Large LED screens will be set up around the main stage and 10,000 seats will be provided at the square. Visitors can watch special performances from rapper BewhY and Insooni, hear an address from Moon and see the Black Eagles, the South Korean Air Force’s aerobatic team, perform a flyover in the skies above Gwanghwamun and Gyeongbok Palace.

In his national address today, Moon could reveal details of his so-called New Korean Peninsula Regime, which he mentioned for the first time Monday during a weekly meeting with his senior secretaries.

Blue House spokesman Kim Eui-kyeom said earlier that day that specifics would be announced by Moon on Friday when he takes the stage for the March 1 Independence Movement event.

Over the past several days, Blue House sources said Moon’s remarks on the New Korean Peninsula Regime largely hinged on the results of the second U.S.-North summit.

Hopes for Moon’s announcement of his new vision were dashed Thursday afternoon after the summit was cut short and the White House announced that no deal was reached. Before the summit ended, Moon was believed to be planning to talk about economic re-engagement with North Korea, as hinted by his remarks on Monday during the senior secretariat meeting.

In Monday’s meeting, Moon said, “If the North Korean economy opens up, neighboring countries, international organizations and global capital will join in its development. In this process, we should not lose the initiative.”

Moon went on, “Standing at the center of history, not the periphery, we will take the lead in preparing for a new Korean Peninsula regime, one that is moving from war and confrontation toward peace and harmony and from factionalism and ideology toward economic prosperity.”

The Blue House explained in a press release Thursday that the March 1 Independence Movement will be celebrated nationwide, and scenes will be shown live in Gwanghwamun using 5G technology.