‘Father of BTS’ tells SNU graduates that anger can be fuel

‘Father of BTS’ tells SNU graduates that anger can be fuel

An SNU alumnus himself, Bang majored in aesthetics and graduated in 1997. He entered the music industry working as a lyricist, composer and record executive, and soon left prominent entertainment company JYP Entertainment to start his own venture. The company’s most successful K-pop group, BTS, put him into the spotlight. They debuted on the American Billboard Hot 100 and performed at the American Music Awards in 2017.

Below are edited excerpts from his commencement speech at SNU’s graduation ceremony. 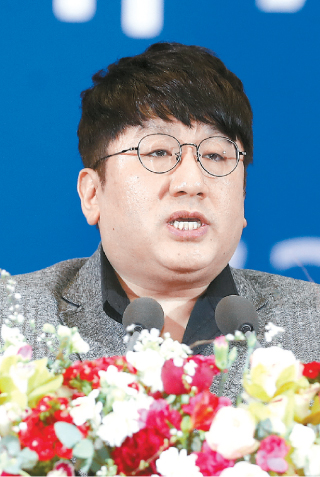 “I don’t have a particular dream, but when I think about the source of my drive, I realized it is my dissatisfaction and fury. I was angry at the easy-going attitude that went for the alternative instead of the best, and the compromise that people take by finishing things in moderation. I went through each day in order to make the best content without any compromise. In my journey, there were a lot of obstacles that made me angry. I was infuriated and unhappy with the situation of the entertainment business as it moved away from common sense. I was always angry, fighting with these problems, which continues today. Now, I feel that my anger is my calling.”

Some of these “obstacles” in Korea’s entertainment business may refer to the promotion that many artists must do, such as appearing on music, entertainment and reality shows in order to advertise their music.

BTS is known for their few media appearances, going on only five TV shows from their debut in 2013 through 2018. This has allowed them to focus on their prolific music career, and they are already on their third studio album.

“People think that my ambition leads me in a calm and orderly manner, but this is not the case. My journey happened so suddenly that I do not remember how I went into the music industry, left JYP Entertainment and founded Big Hit Entertainment. These things were not achieved through dreams. Dissatisfaction and anger lead to change and returns as happiness.”

Bang Si-hyuk has had a colorful journey, producing g.o.d, a successful first-generation boy band in the early 2000s, as well as a string of hit songs, giving him the nickname “Hitman.” His success followed as he produced or composed for artists such as Im Chang-jung, Park Ji-yoon, Rain and Baek Ji-young.

“I want you to think what happiness means to you. If you blindly follow dreams that others make, frustration and misfortune are the only things that will come,” Bang said.

“When you start working in society, there will be many things that are absurd and lack common sense, but I want you to be angry like me and fight against it. Only by fighting can problems be solved and change come.”