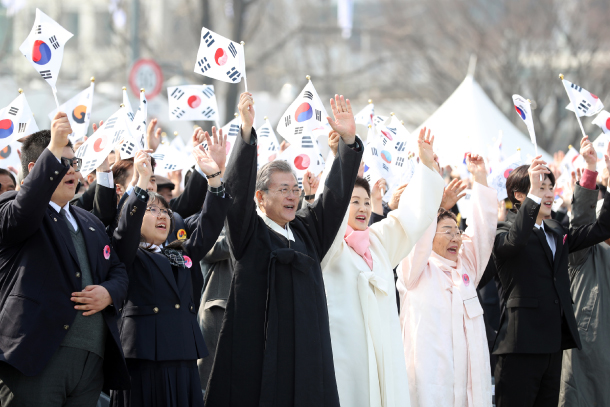 President Moon Jae-in and first lady Kim Jung-sook, along with dignitaries and citizens, chant “Manse,” or “Long live!,” at a ceremony to celebrate the centennial anniversary of the March 1 Independence Movement on Friday in Gwanghwamun Square in central Seoul. [YONHAP]

South Korean President Moon Jae-in said Friday he would discuss the resumption of two major economic projects between the two Koreas with Washington, a day after U.S. President Donald Trump blamed the failure of his second summit with Kim Jong-un on the North Korean leader’s demand for full sanctions relief.

In a national address to commemorate the centennial of the March 1 Independence Movement, when Koreans rose up against Japanese colonial rule, Moon said he would “consult with the United States on ways” to resume tourism to Mount Kumgang and reopen the Kaesong Industrial Complex, both just above the inter-Korean border. The two past conservative administrations of South Korea pulled the plug on both projects.

When progress is shown in North Korea’s denuclearization, Moon continued, “a joint economic committee” will be established between the two Koreas “to produce economic achievements that benefit both South and North Korea,” according to an English version of his speech distributed by the Blue House.

Moon’s description of economic re-engagement with Pyongyang comprised the first concrete details of a New Korean Peninsula Regime initiative he floated on Monday during a weekly meeting with senior secretaries.

“The New Korean Peninsula Regime refers to the order of the coming century in which we will take on a leading role,” Moon said. “Working together with the people and with North Korea as well, we will create a new order of peace and cooperation.”

The New Korean Peninsula Regime, Moon added, “is a new community of economic cooperation that will be formed after the era of ideology and factionalism is put behind us.”

Moon expressed hope that progress in inter-Korean relations will lead to the normalization of North Korea’s relations with the United States and Japan, and later expand into a new order of peace and security in Northeast Asia. Peace on the Korean Peninsula, he said, will be a “new driving force for economic growth” impacting both Koreas and other countries in Northeast Asia, Southeast Asia and Eurasia.

Once railroads between both Koreas connect, the formation of the East Asian Railway Community will be expedited and this will develop into an “energy community and an economic community,” Moon continued.

Moon’s rosy narrative about economic re-engagement with Pyongyang came just a day after a second summit between Kim and Trump ended early and without a single agreement made. Trump later told international reporters in a press briefing that “It was about the sanctions,” adding, “Basically they [North Korea] wanted the sanctions lifted in their entirety, but we couldn’t do that.”

“Importantly,” he pointed out in Friday’s speech, “they even discussed the issue of installing liaison offices, an important step toward the normalization of bilateral ties.”

Highlighting his role as mediator, Moon said his job has become “even more important” now and vowed to closely communicate and cooperate with Washington and Pyongyang so as to help their dialogue reach “a complete settlement by any means.”

On Japan, Moon warned that the era of peace will only dawn when both countries reflect on their shared history and when “the pain of victims is substantively healed through concerted efforts,” refusing to back down in a diplomatic dust-up with Tokyo. Bilateral relations soured after South Korea’s Supreme Court ordered Japanese companies to pay Korean victims of forced labor during its colonial rule, which lasted from 1910 to 1945.

“Only when we contemplate past wrongdoings can we move toward the future together,” said Moon. “The task of setting history right is what is needed to help our future generations stand tall.”