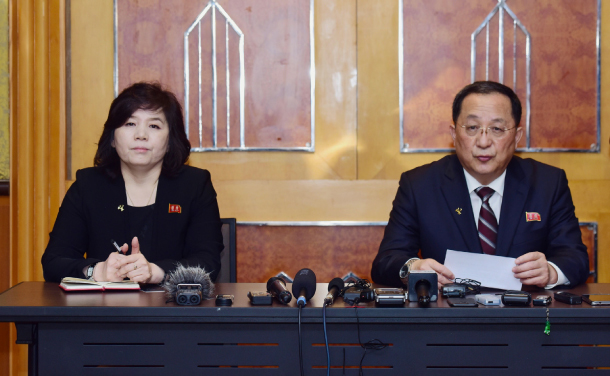 North Korea rebutted U.S. President Donald Trump’s claim that the Hanoi summit ended with no deal because it demanded removal of all sanctions, saying it asked for only a partial easing in exchange for the permanent dismantlement of its key Yongbyon nuclear complex.

Hours after the second North-U.S. summit ended early without the signing of a joint statement, North Korean Foreign Minister Ri Yong-ho told a midnight press conference at the Melia Hotel in Hanoi Thursday, “What we asked was a partial lifting of sanctions, not the entirety.”

Ri’s remarks contradicted Trump’s claim at a press conference hours earlier on Thursday that he had walked away from an agreement because North Korean leader Kim Jong-un had asked for the sanctions to be lifted “in their entirety.”

Ri added that, specifically, North Korea asked “to lift five of the sanctions imposed between 2016 and 2017,” out of a total 11 UN Security Council sanctions.

According to Ri, if the United States partially removed sanctions - particularly ones that hamper the livelihoods of ordinary people - North Korea would “permanently and completely dismantle all the nuclear material production facilities in the Yongbyon area, including plutonium and uranium in the presence of U.S. experts and by the joint work of technicians from both countries.”

This is the “biggest step toward denuclearization we can offer based on the current level of trust with the United States,” Ri emphasized. He noted that while security was its biggest concern, Pyongyang recognized it was too early to ask Washington to address military issues.

He said that the United States “didn’t seem ready yet” to receive the North’s proposal, as it demanded at the talks “one more” measure on top of the scrapping of Yongbyon.

However, Ri did not use any of the North’s usual bellicose language against Washington, leaving open room for future dialogue.

North Korean Vice Foreign Minister Choe Son-hui also took part in the impromptu late-night press conference. North Korean leader Kim Jong-un was lodging in the same hotel, as he was scheduled to continue his official visit to Vietnam through Saturday despite the collapse of his two-day summit with Trump, which ended abruptly Thursday without a planned luncheon or the signing of a joint statement.

Choe told reporters in Hanoi early Friday that she was under the impression that leader Kim may have “lost the will” to make a nuclear deal due to Trump’s negative response.

North Korea appears to be offering a phased type of denuclearization, calling for corresponding measures from the United States including a partial easing of sanctions with each step.

Trump indicated that he had walked away from the talks because he wanted an all-encompassing big deal on denuclearization. Washington expects North Korea to take additional measures beyond the dismantlement of Yongbyon nuclear complex for the lifting of sanctions.

During his press conference in Hanoi immediately after the summit, Trump said that Kim “wanted the sanctions lifted in their entirety.” He elaborated that North Korea was willing to denuclearize “a large portion of the areas that we wanted, but we couldn’t give up all of the sanctions for that.”

Kim, said Trump, had been willing to dismantle the Yongbyon nuclear complex in return for lifting of sanctions, but Washington expected “more than that” and that it wasn’t willing yet to give up “all of that leverage that’s been taking a long time to build.”

Trump further revealed that he had told Kim that Washington is aware of previously undisclosed North Korean nuclear facilities in addition to the Yongbyon complex. He suggested this could include an undisclosed uranium enrichment facility.

“We brought many, many points up that I think they were surprised that we knew,” said Trump.

Trump could have been referring to the unreported Kangson facility in Chollima District, Nampo City, seen as a covert uranium enrichment plant by the U.S. intelligence community and also extensively reported about in the U.S. media after the June 12 Singapore summit.

During Trump’s press conference the previous day in Hanoi, Pompeo indicated that missiles, warheads and weapons systems, a declaration of the North’s nuclear arsenal, as well as the timing and sequencing of everything, were some unresolved issues during the second summit.

Washington has been especially sensitive to the North’s intercontinental ballistic missile (ICMB) program as it could potentially target the U.S. mainland.

Earlier, en route to Manila, Pompeo told reporters, “When you’re dealing with a country that is the nature of North Korea, it is often the case that the most senior leaders have the capacity to make those important decisions.”

While lower-level officials have been preparing for the summit for weeks, a nuclear deal - whether it is a comprehensive roadmap or a phased approach - can ultimately hinge upon the whims of the leaders because of the top-down nature of the negotiations.

“Chairman Kim reiterated on his trip he is fully prepared to denuclearize,” said Pompeo, and “recommitted” that he will not conduct nuclear or missile tests. “Those remain as a pillar, as a foundation. You heard the president say that he is committed still not to conduct the major exercises.”

Pompeo said he is “confident” there is a way to move forward because there is enough “congruence between what the two sides are trying to accomplish” and “goodwill between the two leaders.”

There had been concern about the two leaders’ leaving Hanoi without setting a date for future talks, leaving open the viability of a third North-U.S. summit.

While each side will “need to regroup a little bit,” Pompeo said he is hopeful that Stephen Biegun, the U.S. special representative for North Korea, and his team “will get together before too long” with their North Korean counterparts. But he added that “economic sanctions remain in place.”

Trump sat for an interview with Fox News’ Sean Hannity Thursday and said North Korea had only wanted to denuclearize “certain areas,” and that he hadn’t wanted to lift sanctions unless there is a “real program” toward complete denuclearization.

“Well, they wanted to denuke certain areas and I wanted everything,” Trump said. “The sanctions are there and I didn’t want to give up the sanctions unless we had a real program. And they’re not ready for that and I understand that fully … They spent a lot of time building it.”

He continued, “I wanted them to denuke, and they wouldn’t do the full. They wanted to do some, and I guess a lot of people would have said that’s a great start, but I just didn’t feel it’s right.”

Trump confirmed that the right deal would involve verified, complete denuclearization with on-site inspections on demand, which he said is a “much tougher deal to make … but that’s the deal we should have.”

The second summit, he said, “wasn’t the right time to sign something so we’ll see what happens over a period of time.”

Nonetheless, Trump went on to say his relationship with Kim Jong-un is “great,” complimenting him as being a “real leader” and “sharp as you can be,” though a bit “mercurial.”

Likewise, he reiterated that Kim pledged again there will be no nuclear or missile testing, which is “a big thing.” Trump added he will “believe” Kim and “take him at his word.”

Likewise, Trump called the walk-out a joint decision rather than one-sided on his part. “Let’s call it both,” said Trump. “I don’t want to say it was my choice.

“I think we had a very good two days, but I just don’t think maybe either of us were ready,” he said. “I have a feeling something down the line will happen. And it’ll happen, it’ll be good.”

“It was impressive that Trump said he didn’t want to violate the trust of South Korea, Japan and other partners by accepting too little from North Korea,” said Leif-Eric Easley, an associate professor of international studies at Ewha Womans University in Seoul. “Trump explained that the leverage provided by sanctions took a long time to build up and shouldn’t be given away for partial denuclearization. In other words, Yongbyon is not enough; North Korea needs to disclose its other sites - for HEU [highly-enriched uranium], warhead and missile production - and commit to their dismantlement.”

North Korean state media reported extensively on the second day of the summit, calling it an “important occasion for deepening mutual respect and trust and putting the relations between the two countries on a new stage.”

The North’s official Korean Central News Agency on Friday reported that the two leaders “agreed to keep in close touch with each other for the denuclearization of the Korean peninsula and the epochal development of the DPRK-U.S. relations in the future.”

Kim, it reported, expressed his thanks to Trump for making positive efforts for the successful meeting and, while saying goodbye, promised a next meeting.

Likewise, there was none of its usual bellicose language against Washington, nor did reports refer to the summit ending early, Ri Yong-ho or Trump’s press conferences.

Trump, in a 25-minute phone conversation with President Moon Jae-in Thursday night, asked the South Korean leader to “play an active role as a mediator” by conversing with Kim Jong-un, according to the Blue House. Moon assured him that Seoul will play any role necessary and said he and Trump should meet in the near future.