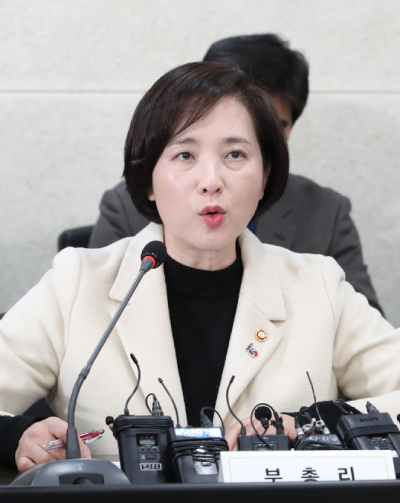 Education Minister Yoo Eun-hae presides over a meeting in Seoul to discuss measures to rein in defiant private preschools on Friday. [YONHAP]

Education Minister Yoo Eun-hae warned defiant private kindergarten administrators on Friday that they will face stiff penalties if they delay the start of the spring semester next week.

The Korea Kindergarten Association (KKA) announced Thursday that about 2,000 of its 3,100 members will launch a mass protest next Monday, when most private kindergartens planned to start classes.

Yoo relayed a far smaller figure during a press conference Friday, saying that 164 private kindergartens are believed to be postponing the start of the new semester.

It was the latest development in a months-long tit-for-tat that began when a lawmaker in the ruling Democratic Party exposed massive accounting fraud at over a thousand private kindergartens nationwide last October. Much of the scandal involved misuse of government funds.

Park proposed a sweeping bill late last year that would revise acts on school meals, private schools and early childhood education to overhaul public funding to private kindergartens and make accounting more transparent at these institutes. The plan would force them to subscribe to an online system that reveals their accounting data to state auditors.

Park’s bill, as well as the Education Ministry’s own plan to build hundreds of new public kindergartens across the country, prompted backlash from the KKA. Several lawmakers from the main opposition Liberty Korea Party lent their support to the KKA and Park’s bill eventually failed to reach the floor for a vote.

In a press conference on Thursday afternoon, the KKA urged the Democratic Party and government to retract the bill and ease all other “rules that have unnecessarily been solidified” lately. The association said it would agree to use the government’s online accounting system because the whole controversy that ensued from its members refusing to overshadowed their other “righteous requests.”

The KKA vowed to postpone their starting dates until the government relents.

In response, Education Minister Yoo said Friday that the government would “sternly respond” to private kindergartens using preschoolers and their parents as “hostages” by delaying school. She added that the group shutdown was an abandonment of the administrators’ responsibility as educators. Yoo said if the kindergartens decide to postpone their starting dates without going through consultations with parents, it would be a violation of the Early Childhood Education Act, and if the KKA forces its members to shut down, this would violate the Fair Trade Act.

Yoo said the government would take administrative action against private kindergartens who fail to start school next Monday as originally planned and audit them. For parents whose children have nowhere to go, the government will provide temporary care services, Yoo said.

Prime Minister Lee Nak-yon is scheduled to preside over an emergency meeting this morning at the Central Government Complex in central Seoul to discuss the issue with relevant ministries and local government offices.