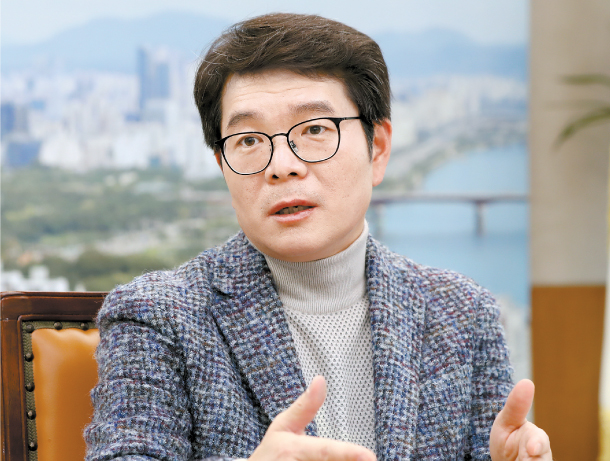 Chong Won O, the Democratic Party (DP) mayor of Seongdong District in eastern Seoul, has some harsh words for districts that he says are competing to offer cash-based welfare policies to residents.

“Local governments are competitively giving out welfare policies that recklessly distribute cash to people, and it is going too far,” Chong said. “These kinds of welfare policies are like an extreme solution to deal with the problem at hand. If these kinds of policies mushroom everywhere, local governments will catch up with each other, and eventually all the stakeholders will collapse.”

Chong’s comment is all the more convincing since he served as an aide to Im Jong-seok, the current chief presidential secretary for President Moon Jae-in, when Im was in the National Assembly. He was also the vice spokesperson for the DP and was twice elected as the mayor of Seongdong District. Chong said that distributing extra money to residents becomes a vicious cycle.
Academics seem to share the same sentiment.

“As giving out cash has the effect of redistributing revenue, it is proper for the central government to implement it nationwide,” said Shin Dong-myeon, a professor of public administration at Kyung Hee University. “Paying extra pay in cash to specific regions has a high likelihood of causing another social inequality problem.”

“Advanced countries in terms of welfare, including Sweden, have already reduced providing extra money for people, and is currently giving people great welfare services,” said Ahn Sang-hoon, a professor of social welfare at Seoul National University. “Since the imbalance between local governments is severe, it is efficient for the central government to raise funds for finances, and the local government to focus services on site.”

“It is no use working in the field and making policies by squeezing out ideas since giving out cash to people, a simple thing, captures everyone,” said Chong in an interview.

“It is urgent for both to negotiate. The central government should be responsible for sharing cash with people and the local government, which is well aware of the inside story of residents, ought to be in charge of service welfare,” said Chong. “I hope that the central government would take over the cash policy once and for all.”

Chong said that rather than giving out cash to ailing senior citizens, it is better for medical teams to visit them in person and give them help.

Q. Is the welfare policy that distributes cash to people problematic?

A. Jung District of [central] Seoul is starting to give merit pay to [the low-income] elderly. It has not even gone into effect, but civil complaints from residents within the district are enormous. The request from the district council is also fierce.

Are you going to give merit pay to the elderly like in Jung District?

Is Seongdong District not giving out childbirth grants?

What do you do instead of giving cash?

As we have increased preschools in the district, we have focused on creating infrastructure in the child care field supported by public finances, but I do not know if we can continue doing this. Since 2014, we have newly established 24 preschools in the district. We raised the number of facilities that offer trustworthy services for parents to let their children safely go to child care centers. As a result, in 2017, Seongdong District ranked No. 1 in the childbirth rate among the 25 districts in Seoul. Our district took fourth place in 2015 and 2016. Yet, residents are consistently raising civil complaints to enhance childbirth grants like other districts. However, if we do so, we cannot create more preschools.


How should the welfare budget be used?

The budget is limited. We need to create a service where the maximum number of people can receive the benefits with the same amount of investment. I have given my cell phone number to the residents so I can receive civil complaints directly and go to sites where people complain about inconveniences, and based on that, I am creating “service welfare.”

What is service welfare?

A classic example is child care facilities. I will take an example of a welfare policy for the aged. I created a corporation that provides jobs for the elderly in their 60s. We arrange for the elderly to work around four hours a day in a coffee shop or a dumpling store within Seongdong District, and we apply living wages and make them receive 600,000 won. For senior citizens over 75, they will have a medical attendant. It is a tailored service to improve their health, where nurses and doctors regularly visit them and check on their health. It is much better than just giving out 100,000 won worth of cash to the aged in that the working experience and tailored service elevates their sense of accomplishment and pride. The satisfaction level with this policy was 95.2 percent.

Why does the local government have to provide welfare services? What do you think is the reason why all the states deal with administrative tasks by themselves?

They mean to provide an administrative service tailored to the actual state of the regions. This kind of service comes out after coming up with ideas by meeting with the residents. The cash welfare system needs neither ideas nor hard work. The system seizes each local government’s ankle. That is why the central and local government should divide the role to implement the welfare policy. It is proper for the central government to take charge of the cash welfare policy and implement it for all citizens. The local government ought to compete to create a service suitable for the actual state of regions. Isn’t a local self-governing system that benchmarks this kind of service healthy?

There are many chiefs of local governments who garnered attention through welfare policies that provide cash to residents, so is it possible to divide the roles?

Probably a great number of heads of organizations are worrying about it. However, since it is hard to capture residents’ hearts [through other means] as much as handing out cash, it is structurally inevitable that they will keep on increasing the amount of cash. If the central government and local government come up with a guideline through negotiation, I will actively join. If the principles are not complied with, a penalty should be given.