Kim won’t meet with Xi on his way back home: Source

Kim won’t meet with Xi on his way back home: Source 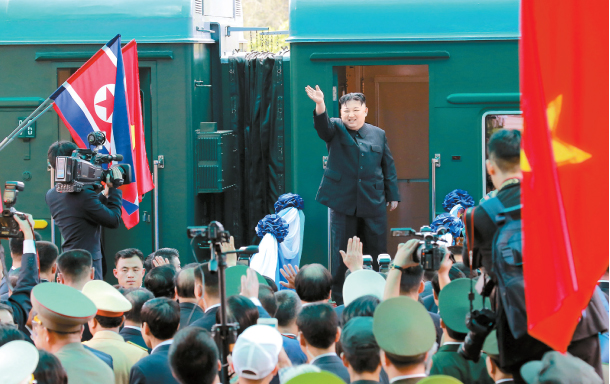 North Korean leader Kim Jong-un boards his train to return to Pyongyang Saturday. The Rodong Sinmun issued a lengthy report Sunday about Kim’s departure from Vietnam, but made no direct mention that his summit with U.S. President Donald Trump broke down. [YONHAP]

The collapse of Kim Jong-un’s second summit with U.S. President Donald Trump has taken a toll on the North Korean leader’s health, and he will likely not stop in Beijing during his return trip from Vietnam today, according to a diplomatic source in China on Sunday.

It was widely believed Kim chose to take the train all the way to the summit venue in Hanoi, Vietnam, so he could discuss the results of the meeting with Chinese President Xi Jinping on his way back to Pyongyang.

A number of diplomatic sources in Beijing said that a meeting with Xi will likely not take place, given the disappointing breakdown of Kim’s summit with U.S. President Donald Trump earlier on Thursday.

Kim’s train, a heavily armored vehicle specially designed for the North’s leaders, was spotted passing through Changsha in China’s Hunan Province at 9 a.m. on Sunday via the same route he took to go to Vietnam last week.

If the train continues on this approximately 3,800-kilometer (2361-mile) route - the shortest possible path from Hanoi to Pyongyang - it will likely bypass Beijing and instead head northward toward the China-North Korea border via Tianjin.

Kim is expected to cross the Yalu River separating China’s Dandong from the North’s Sinuiju by late tonight or early tomorrow morning, based on the 66 hours it took for his train to reach Vietnam.

The Chinese leadership in Beijing also looks unequipped to receive Kim at its capital this time. It is hosting the two annual plenary sessions of its legislative bodies on Sunday and Tuesday. These are the largest political events in China for the year.

The diplomatic source also added that while Kim’s condition is not serious, the North Korean leader’s health took a downturn due to the failure to reach a compromise with Trump. According to the North’s Vice Foreign Affairs Minister Choe Son-hui on Friday, Kim looked like he was losing the will to continue denuclearization negotiations with the United States as a result of the summit.

The two sides abruptly cut the historic second meeting short after an extended closed-door discussion between Trump, Kim and their top officials Thursday afternoon. They canceled a working luncheon and signing ceremony scheduled for later that day.

In a post-summit press conference, Trump attributed the failure of the talks to the North Koreans, saying Kim “wanted the sanctions lifted in their entirety, and we couldn’t do that.”

North Korea’s Foreign Minister Ri Yong-ho and Choe rebuked Trump’s claim in an impromptu press conference at midnight that day, saying they only asked for the lifting of five sanctions related to “the livelihoods of ordinary people” in exchange for the permanent dismantlement of its key Yongbyon nuclear complex.

While both Trump and the North Korean diplomats did not rule out future dialogue between the two sides, Kim’s shorter official visit to Vietnam following the summit suggests his dismay at the results.

The North’s state media reported nothing about the summit’s inadequate resolution, instead saying the two leaders had a “constructive and candid exchange of their opinions over the practical issues” surrounding their countries’ relationship.

While Trump was pelted with criticism after returning empty-handed to Washington, some analysts had a more optimistic view of the Hanoi summit.

At a Korea Society discussion on Saturday, Joel Wit, director of Project 38 North at the Stimson Center, said the fruitless second summit could be part of a longer path to progress, citing a 1986 summit between former U.S. President Ronald Reagan and Soviet leader Mikhail Gorbachev in Reykjavik, Iceland, that collapsed but helped to lay the foundation for a major arms control treaty signed the following year.

“This is not a tactic, this is not a photo op,” Wit said about Kim’s intentions. “This is a real shift in North Korean policy, and he’s trying to move down a different road.”