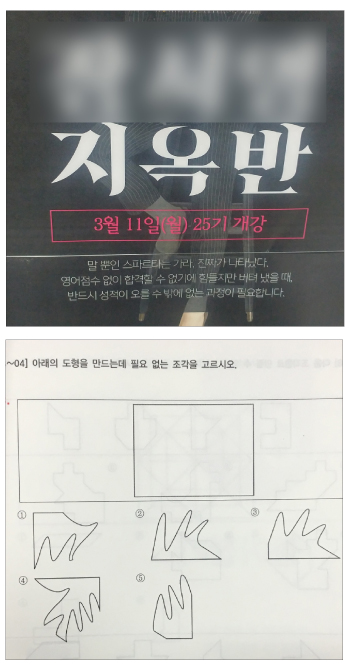 Top, a placard promoting a lecture attached to a hagwon, or a cram school, in Noryangjin, southern Seoul. Above, a mock question asks job seekers to rearrange the shapes to fill the box. [CHOI SEUNG-SHIK]

“How much does a manager have to pay if a tuna gift set is given to his team leader to celebrate the closing of the first half?”

This question is taken from a workbook of mock questions for the National Competency Standards (NCS) test, a standardized written test that evaluates job seekers’ knowledge, skills and attitude. Other questions on the test focused on workplace hierarchy and seniority.

Students preparing to enter the job market line up in front of hagwon, or cram schools, in Noryangjin and Sillim-dong, southern Seoul, day and night to secure seats in the classrooms. They are studying hard to get a good mark on the NCS, a test which, they say, is completely irrelevant to the jobs they actually want to apply for.

Kim Sun-kyung, 27, has been studying for NCS and adaptability and personality tests for a year, but after all that time she still has not found any evidence that the test is in any way relevant to her career.

“The questions are mostly about finding the density of salt water or inferring a conclusion as if playing a game, so I do not know how this is related to the job,” said Kim.

“A teacher invited to our school to deliver a lecture even taught us tricks to avoid solving time-consuming questions.”

Questions on Korean history and English have recently been in the spotlight.

One teacher from a cram school pointed out on television that a Korean history test for local government officials in Seoul required students to align historical events to a timeline with such complexity that even college professors would struggle. Questions like this, the teacher argued, are in no way helpful for hiring because the only thing they can possibly prove is a student’s ability to memorize dates.

The difficulty of the tests has even made headlines internationally - just last month, the Los Angeles Times pointed out that it is easier to enter Harvard than to get a government job in Korea.

Despite how competitive finding a job is, many job seekers get stuck in a cycle of studying, taking tests, failing and repeating. As the time and financial investment increases, people find it harder and harder to quit. Currently, there is little sign of this system of gosi, or qualification exams, changing.

“When the industrial structure changes, the role of the government has to change as well, but the government is so obsessed with abiding by the principle of fairness that the test does not change from evaluating how much knowledge the students have memorized,” said Choi Bae-geun, a professor at Konkuk University’s Department of Economics.

Part of this issue stems from the recent adoptions of blind recruitment, a system that was introduced in the last few years as a way to limit nepotism and sexism in hiring practices.

Blind recruitment is where information that is not pertinent to the job role, such as a candidate’s college, age and gender, is hidden from recruiters. The only issue is that as this system became more common, recruiters needed a new way to evaluate candidates, and many turned to the NCS.

Critics say that due to the overemphasis on adaptability and personality traits, NCS is merely an IQ test. This is because rather than a high GPA or academic test scores, innate intelligence like space perception or reasoning determines the result.

“As the government acknowledges the corruption in employment and emphasizes fairness accordingly, people with authority over human resources have lost subjectivity,” said Yun Chang-hyun, a professor of finance at the University of Seoul.

Questions unrelated to jobs are also widespread in tests to enter private companies. The workbook for Samsung Electronics’ adaptability and personality test poses this question:

“If two stores take a break at an interval of four days and six days respectively and they both have Mondays off, how many days are left until the next Monday when the two stores will both be closed?”

The workbook, which claims to reflect the most recent style of question, asks twenty math and logic questions, such as what kind of shape appears if a block is spun or how one would put these pieces of ripped paper back together.

“Even though I paid 150,000 won [$134] for a three-month online lecture that told me how to role a die, I still cannot explain how it works,” said Park Joo-hee, an office worker.

“It means that it is an unexplainable question, so I cannot understand why these questions are chosen as criterion to discriminate between superior and inferior candidates.”

As aspirants rush to take the tests, private education is booming. Cram schools pull in students with placards that read “Hell class - no lip-service Spartan training anymore,” or “The more desperate you are, the stronger you get.”

Even the teachers at these institutions are uncomfortable with this new approach to marketing.

“Cram schools are marketing by stirring horror in students who have not consistently studied and were not academically strong in school,” said an online teacher who has worked in Noryangjin for 20 years.

“What the mega cram schools are doing is almost like sending students to a slave ship in the Roman era and whipping them to death.”

Employed officials are also unimpressed by the NCS test.

“I remember the word ‘rubella’ was on the vocabulary list for the test,” said a local government official surnamed Jang who works in the Community Service Center. “I hardly think that an American would use that word,” he added.

As the market for NCS cram schools grows, so does the competition.

“Many thought that NCS was not difficult enough to warrant putting time and money into studying, but recently the competition has gotten so fierce that the market for private education for the test is expanding,” said Park Eun-Kyung, a guest professor in charge of NCS study for public companies at Kyung Hee University.

The personality section of the test has also proven controversial. When studying the mock tests, some candidates feel that they have to try and come up with the personality traits that would best suit their target company, rather than their own answers.

“For example, if CJ is looking for talent that is innovative and unafraid of challenge, I have to pick the answers in line with that,” said Park, an office worker.

Kim Yong-jin, a professor of business at Sogang University, thinks that the situation is getting increasingly serious.

“I think Korea is the only country in the whole world that hires people by a large-scale open competitive examination,” he said.

“The policy needs to improve to a system where those needed for a job start as an intern and are employed when they or the company is ready.”