SsangYong, Kia to show off EVs, SUVs in Geneva

SsangYong, Kia to show off EVs, SUVs in Geneva 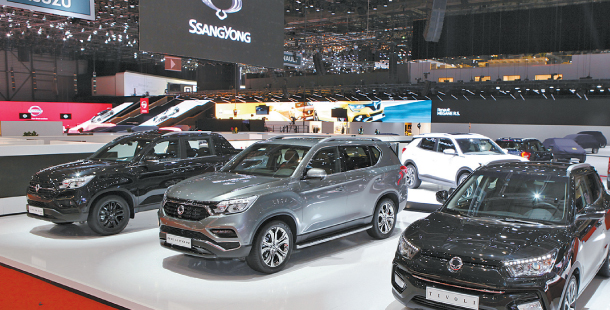 SsangYong Motor cars are displayed Tuesday ahead of the opening of the Geneva International Motor Show. The automaker is featuring six vehicles this year. [SSANGYONG MOTOR]

With just a day left before this year’s Geneva International Motor Show kicks off, Korean automakers are pulling out all the stops with flashy concept cars and new SUVs unveiled just in time to take center stage at the European trade show.

While Kia Motors will be showing off its concept crossover electric vehicle (EV) and four more eco-friendly cars during the event this year, SsangYong Motor is introducing a lineup of six vehicles including the new Korando.

On Tuesday, two days before the public opening of the motor show, which runs until Mar. 17, Kia Motors unveiled its take on an electric future through its concept EV, dubbed “Imagine by KIA.”

“Imagine by KIA is a new EV concept car that holds the future-oriented values that Kia pursues for its EVs,” said Emilio Herrera, chief operating officer of Kia Motors Europe, at the unveiling event in Geneva.

The concept crossover, designed by Kia’s design center in Europe, sports radical design choices including a single extending piece of glass that covers the vehicle’s windshield and roof.

The automaker also took more liberties inside the car, installing 21 overlapping displays that combine to depict a single image for the dashboard.

Along with the new concept vehicle, Kia introduced the electric version of its small-sized crossover Soul for the first time in the European market.

Kia’s push into the EV segment in Europe comes as the market takes a sizeable share of its eco-friendly offerings.

Demand for EVs is growing in the continent as battery EVs and plug-in hybrid EVs sales increased by over 30 percent last year compared to the previous year, according to a report by Hana Financial Investment.

Meanwhile, SsangYong Motor said Tuesday that it will capture the increasing demand for larger-sized vehicles in the European market through its new Korando SUV.

“Through younger customers who value innovative features and the latest technology, the European C-segment SUV has become the largest and most popular market,” said SsangYong Motor CEO Choi Johng-sik at a press event for the motor show on Tuesday. “Korando will be the best choice for European customers who follow the latest trend.”

The C-segment refers to compact vehicles in Europe.

Europe’s SUV market has experienced explosive growth in recent years with 4.3 million SUVs sold in the continent in 2017, a six-fold increase from 2002, according to a report from the International Council on Clean Transportation.

The automaker said it will concentrate on the European market, which accounts for 40 percent of its vehicle exports.

Eco-friendly vehicles will also take center stage for other automakers at this year’s event.