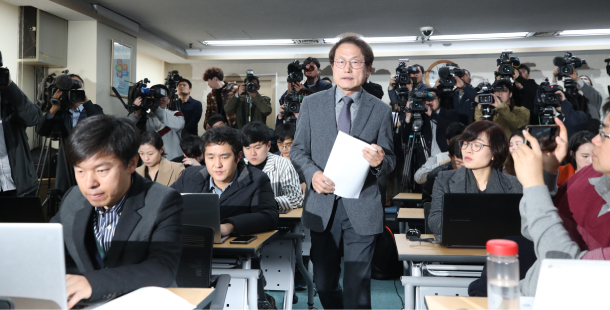 Cho Hee-yeon, the superintendent of the Seoul Education Office, on Tuesday says the office will look into revoking the license of the Korea Kindergarten Association. [NEWS1]

All private kindergartens in Korea began classes Tuesday, the Ministry of Education said, ending a day-long protest over the government’s plan to strengthen oversight over their finances.

“All 239 private kindergartens that had postponed the spring semester classes on Monday commenced their classes Tuesday,” said Kwon Ji-yong, head of the preschool education department of the Ministry of Education. “The local education authorities checked in person this morning to make sure they have begun the semester.”

The hundreds of private kindergartens refused to host classes Monday, which marked the beginning of the spring semester, to protest the government plan to revamp the private preschool education system.

This includes a bill that would revise the acts on school meals, private schools and early childhood education to overhaul public funding for private kindergartens and make accounting more transparent at these institutes. The plan would force them to subscribe to an online system that reveals their accounting data to state auditors.

The bill was proposed after ruling Democratic Party Rep. Park Yong-jin exposed massive accounting fraud at over a thousand private kindergartens nationwide last October. Much of the scandal involved misuse of government funds. In response to the scandal, the Education Ministry said it will also build hundreds of new public kindergartens across the country.

When private kindergartens shut down on Monday, the government warned them that it may seek a criminal investigation into the kindergartens that continue to postpone classes into Tuesday. Because all kindergartens began their classes by Tuesday, the Education Ministry said it will not seek such measures.

Yet it will still request the Fair Trade Commission to investigate the Korea Kindergarten Association (KKA), of which about 3,100 private kindergartens are members, to find out if the association coerced members into postponing classes. The Seoul Education Office will also look into revoking the license of the KKA.

But the struggle of private kindergartens may not be over, according to a member of the association. “Why would we stage such a fight without a valid reason?” a member of the association said on the condition of anonymity. “At least now the people know what kind of a fight we are willing to put up to survive. Because if we don’t, the government policies are going to wipe out private preschool education.”