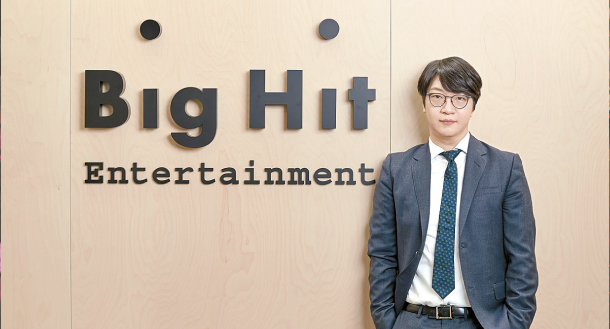 Big Hit Entertainment held its regular board meeting on Tuesday and appointed Yoon Seok-jun, its former chief business officer, as its new joint president, the agency announced on Wednesday.

As the joint head of the agency, Yoon will be in charge of global businesses, video content and intellectual property and new platform projects, while Bang Si-hyuk will focus on production.

The decision comes as a means to utilize the leaders’ expertise, as the company sees rapid growth both in its volume and power.

“We are going to strengthen our competitiveness by separating the content-creating field and production, and do our best to meet fans’ expectations and grow our global competitiveness,” said the agency.

Yoon joined Big Hit Entertainment in 2010 as the head of the strategic planning team, and has been taking care of the company’s businesses in creating content and managing various businesses, and is considered the “hidden secret” behind the company’s success.

“Yoon Seok-jun is a person who has challenged himself by entering various new fields, and has never stopped his endeavor to make the best content,” said the agency.

“Love Yourself: Answer” ranked 97th on the Billboard 200 chart on March 9, five notches down from 92nd place, where it saw itself the previous week.

It’s been 27 weeks since the final edition of the “Love Yourself” series topped the chart in September.