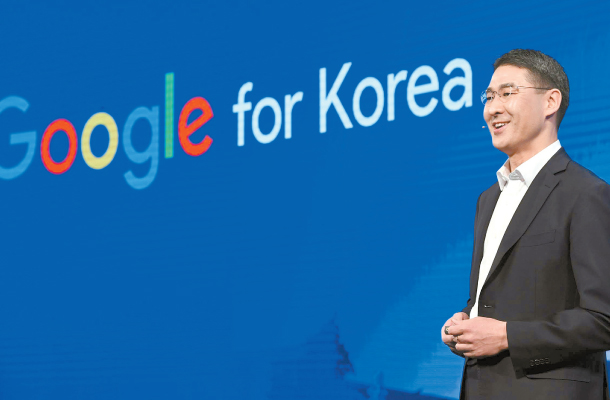 Google will expand support to increase the number of machine-learning developers in the country and aims to train 50,000 people in the next five years as part of that initiative, the company said Wednesday.

Google offered its insight into machine learning at its “AI with Google 2019” event in central Seoul, sharing its machine-learning technology and how it was being used to benefit local start-ups and consumers.

“We want to bring the benefits of AI to everybody,” said Google Korea CEO John Lee during his opening speech.

“There’s a lot of uncertainty globally and we all feel a sense of urgency to better understand how we can maintain technology leadership. We think Google has a unique role to be here for Korea - to help Korea grow and innovate.”

Google already offers a program called the “Machine Learning Study Jam,” in which it provides educational material for people that register as study groups.

Enrolling in the program is free and the material offered differs according to the group’s level of understanding. Having started last year, it was originally offered to people living in Seoul and Gyeonggi, but the boundaries will be expanded nationwide this year.

At the event, two local start-ups offering AI-based services were introduced as well. Deeply is a sound machine-learning app that recognizes a baby’s needs by analyzing how it cries. Mathpresso is an app where students can upload math questions to ask for answers and ways to solve them. This year, Deeply will be part of Google Campus, a start-up support program.

Lily Peng, Google’s AI product manager, was one of the speakers on Wednesday. Originally trained in medicine, she is now a researcher at Google’s AI health care sector that specializes in combining machine-learning technology to read patient’s medical videos to detect diseases.

One case Peng mentioned as an example was the diagnosis of diabetic retinopathy, a complication of diabetes that causes damage to the retina, resulting in blurry vision. The disease can be cured, but only some doctors are specialized in spotting the problem, leaving many patients to eventually lose their sight.

“When reading [medical photos or videos,] doctors have to look for little signs, sometimes hard to spot, and unfortunately in many parts of the world we simply don’t have enough doctors to do this,” said Peng.

She also added that for some diseases the signs are so small and require doctors to look into many types of data at the same time, meaning diagnosis may differ according to the doctor. Machine-learning software based on diagnosis from multiple doctors may offer a helping hand.