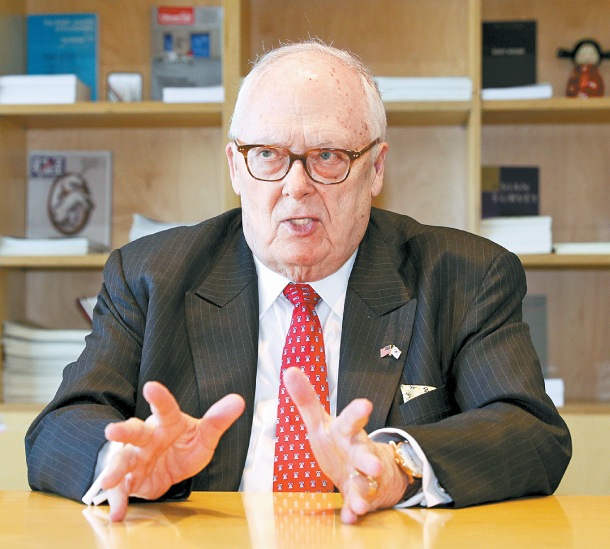 In an interview with the JoongAng Ilbo weeks before the much anticipated U.S.-North Korea summit in Vietnam, conservative notable and Heritage Foundation founder Edwin J. Feulner had great expectations for the summit.

While the optimism in that interview, published Feb. 21 in the Korea JoongAng Daily, was shared by many others including the South Korean government, it was not encouraged by the outcome of the summit itself.

And yet Feulner remains sanguine in his outlook on the North’s denuclearization - as well as in U.S. President Donald Trump’s capacity to ultimately reach a satisfactory deal on the issue.

Calling the summit’s outcome a “very much measured yet decisive move” by Trump, Feulner said in a general statement on the event that the president defeated a “temptation to reach a flashy but poorly crafted deal” for which he should be commended.

A renewed crisis on the Korean Peninsula was unlikely, Feulner continued, since North Korean leader Kim Jong-un promised not to resume nuclear or missile tests that could raise tensions.

The best response for the United States and its allies at this point, Feulner said, is to neither escalate threats nor “offer more concessions” to break the stalemate.

Feulner added that the situation offered a chance for South Korean President Moon Jae-in to review his role as “an effective mediator or facilitator” in regard to the future of the process.

The JoongAng Ilbo conducted a follow up interview with Feulner this week via email in which he laid out his views on the surprise results of the summit as well as a way forward.

Q. Do you still believe that tours to Mount Kumgang can be resumed, as the South Korean government obviously wishes?

A. Yes, in due course later this year or so. The Hanoi summit was not a breakdown of the negotiation. In my view, it was a good occasion where President Trump gave a necessary reminder to North Korea’s Kim in terms of what must be on the table and done in order to go from where we are to the next big step.

Again, it was a friendly walkaway. Although no timetable for a third summit is currently on the horizon, coming months, particularly later this month, April, and May, will be important and telling junctures. What’s ahead of us is quite notable: three potential big occasions including Trump meeting Xi Jinping, Xi’s visit to North Korea in April and Trump’s visit to Japan in May. I would not be surprised to see another meeting between the two Koreas.

Some in Seoul worry that the North Korean issue might no longer be Trump’s top priority with his re-election bid fast approaching. Do you agree?

I disagree with that argument. It seems to me that the whole North Korea issue has been and will still be on President Trump’s radar with keen interest and attention. President Trump and his team remain serious about the issue. Clearly, North Korea is a foreign policy issue, not a presidential election issue. We cannot control and predict the whole, ongoing process of denuclearizing North Korea. It would be wrong to put the negotiation process in the frame of the upcoming election cycle.

What do you make of the possibility that Kim Jong-un may break his promise to pursue denuclearization? If so, what would be the aftermath?

Obviously, the other road North Korea’s Kim may take would be the complete halt and even reversal of what has been built since 2018. There will be consequences. Remember that the current “maximum pressure” sanctions are not just America’s - they have been the agreed and coordinated response of the international community, through which President Trump has brought North Korea to the diplomacy table.

North Korea’s Kim must know it well and better. It is notable that Kim offered to meet Washington’s goal of complete, verifiable and irreversible dismantlement of at least the major nuclear complex at Yongbyon with its 300 different facilities. It is not nearly enough to justify lifting all or a major share of economic sanctions, but it is also not nothing, and at minimum provides a starting point for the next phase of negotiations. Kim seems to have shown a measure of respect for President Trump.

What is your take on the possibility that Washington now wishes Seoul slow down its pursuit of inter-Korean initiatives for fear of harming the sanctions regime against the North?

Both directly and indirectly, the Hanoi summit has reinforced and amplified the necessity of the U.S.-South Korea alliance and partnership. There can be no daylight between Washington and Seoul as we move ahead on the evolving relationship with Kim Jong-un and North Korea.

I happen to think that the Hanoi summit has offered timely political and diplomatic space for President Moon to reassess and sharpen up his role as an effective facilitator.

Do you think it would be wise for South Korea to postpone an inter-Korean summit, which it has hoped to convene in Seoul in the near future?

I think the inter-Korean summit is an important dimension we cannot discard.

U.S. State Department’s Special Representative for North Korea Stephen Biegun appears to be in a predicament now that the summit has flopped. What is the atmosphere like at the State Department?

The negotiation itself had been handled with competence and courage by Trump and his foreign policy and national security team. As President Trump’s special envoy for North Korea, Ambassador Biegun has been at the frontline of narrowing the gap between Washington and Pyongyang while reinforcing President Trump’s seriousness about the negotiation. That has been in close coordination with others as well. I am confident that we will see more of that. It may be tempting to call the Hanoi summit a failure or a missed opportunity. My sense is that the past summit may have well established clearer and greater understanding of what’s really at stake and what must be done to get to the next stage of the evolving relationship.

Let me also add that despite some initial dire reactionary assessments of the immediate outcome, the meeting between President Trump and Chairman Kim Jong-un, in fact, greatly strengthened Washington’s longer-term negotiating position and advanced the prospect of North Korea’s denuclearization, either peacefully or by a return to the maximum pressure campaign.