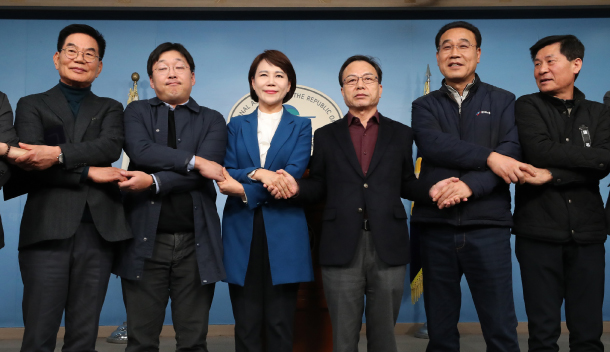 Democratic Party Lawmaker Jeon Hyun-heui, third from left, who led the ruling party’s task force to resolve the carpool issue, Kakao Mobility CEO Jung Joo-hwan and representatives of the taxi industry pose for a photo at the National Assembly in Yeouido, western Seoul, on Thursday. After months of discussions, they finally reached an agreement in a meeting Thursday to allow carpooling services with limits on operating hours. [YONHAP]

The successful conclusion of the three-way discussions ends months of bitter disputes that led to the suspension of a beta service and immolations by three taxi drivers, two of whom died as a result.

Kakao’s new service will be available only during weekday commuting hours between 7 a.m. to 9 a.m. and 6 p.m. to 8 p.m. It will not operate on weekends or public holidays.

“We made our best efforts to reach an agreement even though the outcome would not fully satisfy all parties,” said Democratic Party lawmaker Jeon Hyun-heui, the leader of a government task force on the carpool issue.

But at least for Kakao Mobility, the decision appeared fair enough.

“[Kakao Mobility] finds the result meaningful because it helped reach a consensus that will pave the way for broader mobility service and reduced tensions,” the company said in a statement.

In exchange for the compromise from the taxi industry, the government will push for a set monthly salary system for taxi driver employees.

Presently, drivers’ monthly pay differs depending on their hours.

The three parties also said they would work on launching an integrated platform that can benefit licensed taxi drivers and new carpool participants.

“There was consensus that conventional cab services need to be incorporated into the platform and certain regulations in the transportation service sector need to be lifted,” Jung Joo-hwan, CEO of Kakao Mobility, told reporters after the meeting.

Jung argued that regulations regarding vehicle types and operating locations of taxis have gotten in the way of efforts to bring about new ideas to the industry.

According to an agreement among the three parties, for the sake of public safety, the number of older cab private taxi drivers will be reduced over time, although the statement declined to mention a specific age or time frame.

The agreement said that related bills will pass within March if they are pending at the National Assembly.

Kakao Mobility launched a beta service of its carpool service on Dec. 7, but halted it after two taxi drivers set themselves on fire.

Still, it is too early to say that all problems involving traditional cabs are resolved.

The service operates minivans that can fit 11 people, a loophole in Korea’s transportation act because passenger cars that carry 11 to 15 people can be legally leased with a driver.