Can Moon make a unicorn?

Can Moon make a unicorn?

HA SEON-YOUNG
The author is an industrial news reporter at the JoongAng Ilbo. 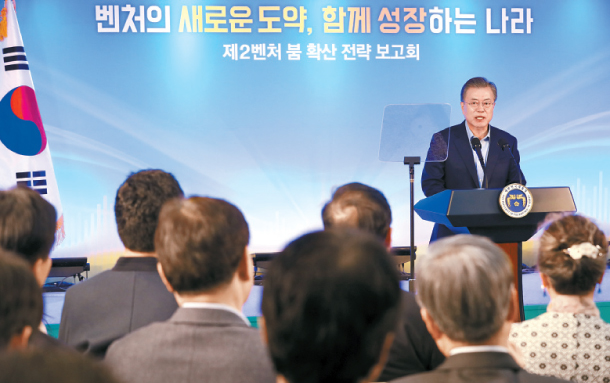 According to global market research service CB Insights, four of the top five unicorn companies in the world — unlisted companies with more than $1 billion in value — are based on the share economy. But Uber (81 trillion won [$71.2 billion] in value), DiDi (63 trillion won) and Airbnb (32 trillion won) are “pies in the sky” in Korea. Under the current law, car-sharing services are banned outside of rush hour, and home-sharing for Koreans is restricted to just 180 days a year. If these companies started in Korea, they would have soon been shut down.

As President Moon Jae-in announced his strategies to kick off a second start-up boom at D.Camp in Yeoksam-dong, southern Seoul on March 6, he set a goal of increasing the number of unicorn companies in the country to 20. The government plans to invest 12 trillion won in four years to nurture promising start-ups to become global unicorns. However, start-ups that could benefit from the policy are skeptical. They claim that it is hard to do business in Korea because of unnecessary regulations, and the idea of making a unicorn company with government funding is outdated.

The government plans to support start-ups and ventures, expand start-up bases and have the Ministry of SMEs and Startups create several trillion won funds. It will require taxpayer money, and there is no other country in the world in which the government directly invests tax money to nurture unicorn companies. Lee Kyung-buk, a business school professor at Seoul National University, said that real regulatory reform would be creating a second start-up boom without taxpayer money. Socar CEO Lee Jae-woong, a first-generation venture businessman, wrote on his Facebook that the government should invest money for ventures on restructuring traditional industries so that they don’t interfere with innovation.

The 28-page action plan jointly issued by 10 ministries, including the Ministry of Economy and Finance and the Ministry of SMEs and Startups actually does not include the regulatory reform that start-ups want.

The regulatory sandbox, which has already been implemented, is the only regulatory reform strategy.

A venture businessman who attended the second venture boom conference said that the president and the ministers read the policies and took pictures without having discussions with businessmen and start-up founders themselves.

Instead of having this kind of event, it would be more helpful to create a substantial policy by meeting with the heads of unicorn companies from around the world to ask their secrets to success.