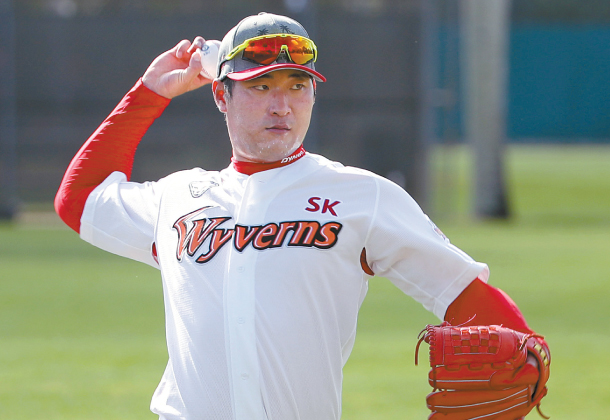 When the SK Wyverns called out Ha Jae-hoon’s name during the 2019 Rookie Draft on Sept. 10, 2018, Ha was flabbergasted. Despite having spent years playing as outfielder in the minor leagues in the United States, he had just been drafted into the KBO as a pitcher.

Six months has passed since that fateful day and there are now just less than two weeks left until the first day of the 2019 regular season. The Wyverns’ unexpected decision appears to be paying off - Ha may just be the league’s next fire baller.

During the Wyverns’ spring training in Okinawa, Japan, Ha’s fastest pitch was 155 kilometers (96.31 miles) per hour. Then, during a practice game against the LG Twins, Ha tossed a scoreless inning against Twins batters Kim Hyun-soo, Tommy Joseph and Chae Eun-seong.

Against the Hanwha Eagles, Ha once again tossed a scoreless inning. In practice games, Ha’s fastest pitch was recorded at 153 kilometers per hour.

Interestingly, it’s not only the speed of his pitch that makes Ha a standout pitcher. As he pitches with great rotational speed, his sliders and curve balls are also threatening. Although this will be his first season playing as a pitcher, expectations are high that he’ll be able to pull it off comfortably as he’s spent plenty of time training in the bullpen throughout his career.

“Ha Jae-hoon is showing great pace,” said Wyverns manager Yeom Kyung-yup. “He’s a pitcher with a lot of strengths. But I won’t overuse him from the start. I’ll give him plenty of time to adjust.”

Although Yeom made it sound like Ha is not going to be the Wyverns’ closer at the start of the season, it is clear that he is slowly establishing himself as a crucial member of the Wyverns’ bullpen.

In the KBO, a number of players have switched their position from either catcher or fielder to pitcher, but there haven’t been many that have done so as late as their late 20s and still seen success.

Kwon Jun-hun may have been the only player to successfully transition from fielder to pitcher so late in their career. After playing 10 seasons as a batter and third baseman, Kwon became a bullpen pitcher at age 29, going on to pick up 19 wins, 11 losses, 29 saves and 40 holds with a 3.32 ERA in his nine years on the mound before retiring in 2008.

However, Ha’s career has been a lot more dramatic than Kwon’s.

After graduating high school, Ha was among the many major league hopefuls. To realize his dream of playing in the big leagues, Ha left for the United States and signed with the Chicago Cubs. With just a $100,000 signing bonus, Ha joined the Cubs franchise rather than the KBO.

Starting at the bottom of the minor leagues, Ha slowly made his way up. In 2012, he competed in the All-Star Futures Game, and in 2013, Ha was promoted to the Triple A team, the highest division in the minor league. He showed great batting skill, speed and, most importantly, great throws from the center field.

Despite reaching the Triple A, Ha began to struggle at the end of the 2013 season, undergoing wrist surgery. After the surgery, Ha tried to make a comeback in 2014 but ultimately missed out on a spot on the Cubs’ 40-player roster. Ha was eventually released by the club at the end of the 2015 season.

As the KBO requires major league returnees who have never played in the KBO to wait two years before debuting, Ha continued his career by playing for an independent league team in Japan in 2016.

As Ha recorded a batting average above .600 in Japan, he was given an offer from the Tokyo Yakult Swallows of the Nippon Professional League. During the KBO’s two-year probation period, a player is not allowed to sign with another professional team in the United States or in Japan. If a player does sign with a professional league team, they need to start their two-year waiting period all over again.

Despite the strict rule, Ha signed with the Swallows. The result was another failure, with just a .225 batting average in 17 games.

Due to this, Ha returned to the independent team in Japan and played 52 games as an outfielder and 17 games as a pitcher. In one of the 17 games, the Wyverns spotted Ha and checked his potential to be a pitcher.

Despite Ha’s attachment to playing outfield, Yeom has constantly pushed him to start a new career on the mound in the KBO.

“Every team has one too many outfielders,” Yeom said. “[I persuaded him by saying] you have a lot more potential as a pitcher. Now you need to think about your family.”

Now, Ha has accepted the third challenge in his career, playing as a pitcher in the KBO. After a difficult career with a lot of disappointments, the 28-year-old needs this move to turn out well.