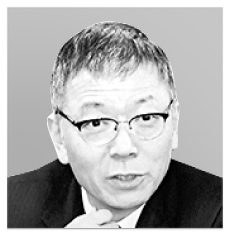 Yoo Jeh-seung
The author is vice director of the Korea Research Institute for National Strategy and former deputy minister for policy for the Ministry of National Defense.

Pessimism is growing over prospects for the denuclearization of the Korean Peninsula and the establishment of a so-called peace regime. The second U.S.-North Korea summit, despite high expectations among many, failed, and the two leaders could not even agree on a basic definition of denuclearization. Tensions may appear eased because of dialogues that have taken place since early last year, but it is a very fragile peace. North Korean military threats are unchanged, yet the joint defense posture of the South and the United States has weakened. Even after the collapse of the U.S.-North Korea summit in Hanoi, Vietnam, South Korean President Moon Jae-in still promotes the “new Korean Peninsula system,” pushing his role as a mediator and vowing to produce success in the U.S.-North Korea denuclearization negotiations.

The Moon administration appears to have a romantic belief that if it speedily pushes forward inter-Korean cooperation projects, such as the resumption of operations at the Kaesong Industrial Complex and Mount Kumgang tours, the North’s denuclearization will be stimulated. But the first step should be concrete denuclearization actions on the North’s part.

Now, we are aware of the risks and traps inside the North’s strategic plan. Pyongyang espouses the illusion it will follow through with its denuclearization promise and shut down the aged Yongbyon nuclear facility step by step in return for the complete lifting of sanctions. The North wants to buy time by making unacceptable demands — such as the withdrawal of the U.S. Forces Korea (USFK) — in negotiations over its future and past nuclear capabilities in other regions to be recognized as a nuclear state. North Korean Foreign Minister Ri Yong-ho hinted in Hanoi that after sanctions are lifted, Pyongyang has the intent to raise issues regarding the USFK. It is significant to remember that former and current Directors of National Intelligence recently said it won’t give up the nuclear program.

Now is the time for “Plan B.” The key is a comprehensive approach composed of three factors: dialogue and sanctions, deterrence and threats, and nonproliferation and counter-proliferation.

First, we must redouble our efforts on both talks and sanctions. While maintaining dialogue with North Korea, additional economic, foreign affairs, human rights and military pressure should be enforced. This is the way to change North Korean leader Kim Jong-un’s calculation. U.S. President Donald Trump has said the sanctions can be maintained steadily, but time is not on our side. The North has been continuously producing nuclear materials and advancing its weapons capabilities. As such, we must first pressure China and Russia to faithfully implement their economic sanctions.

Last year alone, North Korea earned over $500 million through textile trade with China, exports of iron ore and sending laborers to China. We must stop the influx of such capital. North Korean experts say the North’s economy will be unable to endure the current sanctions for another two years. If their analyses is right, sanctions’ effectiveness is clear. “For us, every minute counts,” said Kim before the Hanoi summit. That’s an important message: human rights abuses in the North must also not be ignored.

Second, the impact of deterrence and threats should be increased. To this end, the South Korea-U.S. nuclear sharing system should be improved for the sake of self-deterrent measures. The Korean three-axis system — the Korea Air Missile Defense, the Kill Chain and the Korea Massive Punishment and Retaliation — must all be advanced. The joint decision-making process of Seoul and Washington, including the deterrence strategy committee, should be reinforced, while the process for Washington to consult with Seoul before conducting a nuclear operation should be strengthened. Drills to protect U.S. nuclear bombers should be conducted.

The defense posture cannot be maintained without military exercises. Joint South Korea-U.S. drills must be restored. Since the Ulchi Freedom Guardian, Key Resolve and Foal Eagle drills were discontinued, fear that the joint control and command and defense systems will become powerless has spread.

A last resort must be prepared to pressure North Korea to give up its nuclear program. The first-stage containment operation must be planned more tightly than the armed demonstration by the three aircraft carrier fleets in November 2017. The second-stage strike operation should take the form of a surprise attack. The United States plans to operationally deploy W76-2 low-yield nuclear warheads on trident missiles of nuclear-powered submarines until the fourth quarter of this year. This new weapons system is capable of conducting a surgical strike on a key enemy target, stopping a war from expanding. It is the most powerful threat to North Korean leadership.

Third is the complete implementation of nonproliferation and counter-proliferation measures. If nuclear arms or materials are handed over to a third party while we focus on dialogue with North Korea, a disaster will ensue.

In “Politics as a Vocation,” Max Weber argued that the ethic of conviction and the ethic of responsibility should be harmonized in a dialectic way. After the failure of the North Korea-U.S. summit, this proposition seems more convincing than ever.