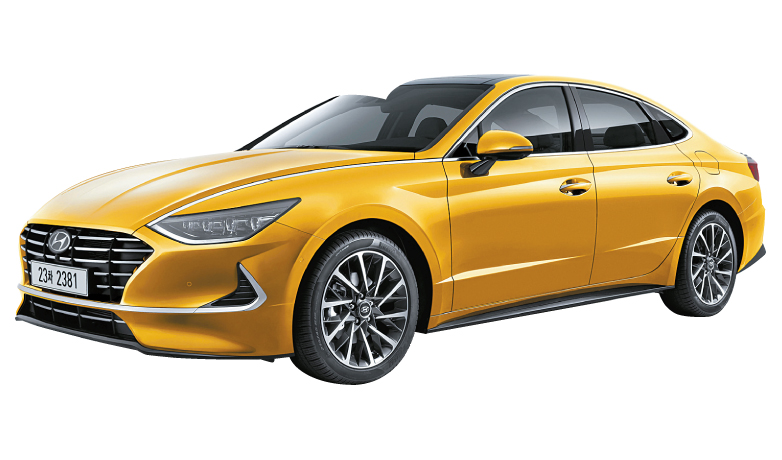 Hyundai Motor may have succeeded in reigniting consumer interest in its once best-selling sedan, the Sonata, as the latest version has been greeted with positive reviews from auto experts and consumers ahead of its official launch next month.

Several overseas automobile publications have complimented Hyundai’s latest version of the sedan. The Korean automaker introduced the eighth-generation Sonata last week, five years after the release of its predecessor.

“Hyundai’s mid-size sedan is once again banking on style as its key asset,” said Car and Driver, an American automobile magazine. “The mid-size sedan’s new fastback-like shape is sleek and daring, marking a bold departure from its more conservatively styled predecessor.”

The new sedan comes with a sporty appearance with accented lines running along the hood from a cascading grille, Hyundai said on March 6. The product is 30 millimeters (1.18 inches) shorter in height and 35 millimeters longer at the wheelbase than its predecessor.

“The automaker focused on creating a more appealing and progressive design than the current model,” wrote MotorTrend, another American automobile magazine. “Now the new Sonata has shown its face, and we can say Hyundai has accomplished the goal.”

Over the last five years, Sonata sales have declined as consumer demand shifted toward larger vehicles. Hyundai sold more than 100,000 Sonatas in 2014, but that number dropped to below 70,000 last year. Hyundai’s larger Grandeur sedan generated more sales than the Sonata last year.

The new Sonata will officially debut at the New York International Auto Show in April. Hyundai started taking preorders on Monday, with the price for the base model starting at 23.46 million won ($20,800).