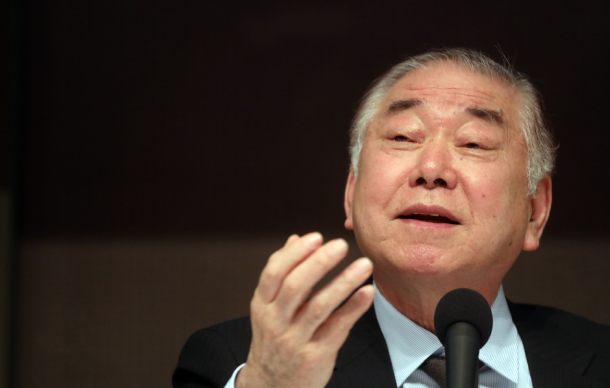 South Korean President Moon Jae-in’s diplomacy adviser, often regarded as Moon’s unofficial spokesman, said Tuesday that North Korea would be making “a terribly bad gambit” if it tries to use its Tongchang-ri missile test site as leverage in denuclearization talks with the United States.

Moon Chung-in, a distinguished professor emeritus of political science at Yonsei University in Seoul who serves as President Moon’s adviser on security, unification and diplomacy, made the remark during a debate at the Korea Press Center, central Seoul.

The adviser was responding to recent satellite imagery from Beyond Parallel, a program of the U.S. Center for Strategic and International Studies, which indicates Pyongyang has “continued preparations” on the launch pad and vertical engine test stand of the Tongchang-ri site, located in the country’s western North Pyongan Province. Those activities, the website said in a report published last Saturday, could be consistent with preparations for “the delivery of a rocket to the launch pad or engine to the test stand” or Pyongyang’s “coercive bargaining tactics” after last month’s failed Vietnam summit between North Korean leader Kim Jong-un and U.S. President Donald Trump.

Moon Chung-in warned Tuesday that North Korea will have to refrain from causing “a huge catastrophe” in the summit’s aftermath, noting that dialogue between Pyongyang and Washington was still ongoing because Trump mentioned he was willing to continue talks with Kim.

The summit ended without a deal, but that doesn’t mean prospects to sign one in the future have been shattered, according to Moon.

“I think of it more as a painful odyssey process, not a failure,” he said.

When asked which country - the United States or North Korea - bore more responsibility for the summit’s breakdown, Moon said both countries were to “blame.” He then quickly added that the United States “broke” the “flow of negotiations” by unpredictably ditching its previous step-by-step approach toward the denuclearization issue and presenting a “big deal” to the Pyongyang negotiators during the summit, which is why there was “more reason to blame” the United States for the shattered talks.

Moon said he was “recanting” his earlier remark that both sides were to blame, and spared Pyongyang from accountability.

The adviser mirrored President Moon’s anxiety about decreasing momentum in Washington-Pyongyang discussions, stressing that both countries must not abandon dialogue.