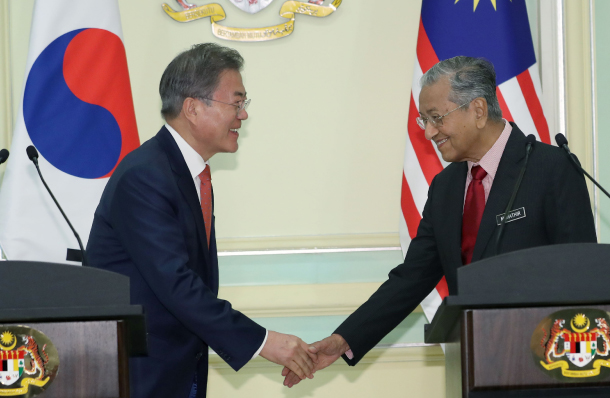 South Korean President Moon Jae-in, left, and Malaysian Prime Minister Mahathir Mohamad shake hands during a press conference at the Prime Minister’s Office in Putrajaya, Malaysia, on Wednesday. The leaders of South Korea and Malaysia agreed Wednesday to launch negotiations on a bilateral free trade agreement (FTA) and seek their conclusion before the year’s end. South Korea and Malaysia conducted a joint feasibility study for a bilateral FTA in 2011-12, but discussions have since stood still. The FTA, if signed, will complement the South Korea-Asean FTA that went into effect in June of 2007. The South Korean president is on the second leg of his Southeast Asian tour to Brunei, Malaysia and Cambodia. [JOINT PRESS CORPS]