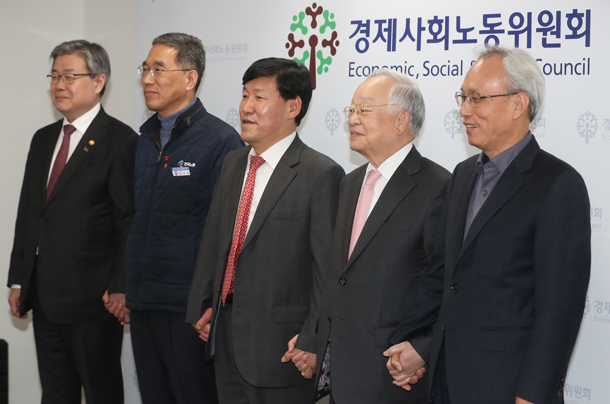 Members of the Presidential Economic, Social, and Labor Council stand together in Seoul on Feb. 19 after they hold a meeting on flexible working hours. [NEWS1]

The main opposition Liberty Korea Party delivered a major upset to the ruling party and the Blue House when its floor leader Na Kyung-won mocked President Moon Jae-in in a National Assembly speech on Tuesday. She said the foreign press was calling him the chief spokesman for North Korean leader Kim Jong-un. But the president had already lost face a few days earlier. The Presidential Economic, Social, and Labor Council plenary meeting to be held at the Blue House was abruptly called off on March 7 after three members representing the women, youth and the irregular workforce gave no-show notices the night before. It is rare for a meeting hosted by the president to be canceled on such short notice. The Blue House had to shelve a statement touting a voluntary consensus on flextime extension. The plenary session was rearranged four days later in hopes that an agreement would be ready for submission to the legislature for a vote, but the three members called in no-shows again six minutes before the meeting.

Personally, I believe the Blue House should have proceeded with the meeting. The vacant seats would have been a reminder the patience needed for a contentious issue to be settled among parties with obvious conflicts of interest. A stony face from the president could have sent a strong message on the meaning of consensus. Circumstantial evidence suggest meddling by the Korean Confederation of Trade Unions (KCTU), although it has refused to partake in the tripartite labor panel activities. The president also could have showed that he will no longer put up with the selfish ways of the union. A meeting without any result can be meaningful, too. That is why many applauded U.S. President Donald Trump walking away from the summit talks with North Korea’s Kim in Hanoi.

Moon is committed to compromise through dialogue. But from his track record, that approach may be in need of some reconsideration. Extending the legal definition of flextime was agreed to by leaders of political parties during a meeting with the president in December. It was put up for discussion by the labor panel under the president’s wishes. The result was a disappointment to all parties. The extension to six months instead of a year demanded by the business sector is as ineffective as the compromise between the taxi and carpool industry to allow ride-sharing for two hours during the weekday rush hours in the mornings and evenings. The ruling party and government try to glorify such achievements as ideal compromises between rival parties. But neither passengers nor the carpool and taxi industries are happy.

The idea of ironing out differences and coming to a compromise through dialogue is noble. But a dialogue cannot be concluded by depending on goodwill from the conflicting parties. The Wassenaar Agreement reached in 1982 between employers and labor unions in the Netherlands to restrain wage growth in return for policies to address unemployment and inflation is often cited as an exemplary case of a social pact. A serious economic crisis triggered the rigorous negotiations. An accord was possible because the government was determined. Ruud Lubbers, head of the Christian Democratic Appeal, came to office as prime minister that year pushing for legislation to freeze wages of public officials, the minimum wage and social security. The unions and employers reached a settlement just days before the bill was to put to the legislative.

Koreans are not like the Dutch. They are not used to coming to an agreement through debate and do not trust the government. Although many other organizations signed the pact, the negotiations were led by the umbrella trade union and employers association. The members of the two organizations had full faith in the parties representing them. But Korea’s two umbrella trade unions often go separate ways. The KCTU is divided into several factions. Including differing factions in the labor panel cannot ensure smooth negotiations and agreement.

The Blue House issued a statement about “regretting” the breakdown in the negotiations over flextime. It is waiting for the unions to change their minds. Social pacts come together when a crisis hits a society. We may have to wait until the crisis deepens.