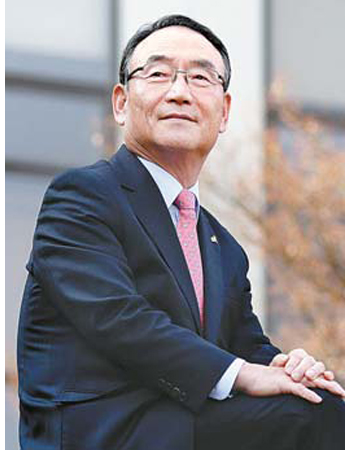 Kim In-kyu, president of Kyonggi University, was interviewed by the JoongAng Sunday on March 5. [SHIN IN-SEOP]

Kim In-kyu, 69, president of Kyonggi University (KGU), plans to transform his institution into a hot spot by focusing on Hallyu, or the Korean wave of cultural content, and artificial intelligence (AI). Inspired by the popularity of K-pop around the world, Kim plans to build the first “Hallyu culture graduate school” on the school’s Seoul campus.

Kim plans to apply a “New Start” strategy on KGU’s Seoul and Suwon campuses following a pledge during the school’s anniversary celebrations in 2017. The idea is to turn KGU’s Seoul campus, which is home to the culture and tourism college that consists of nine departments with 2,092 students, into a mecca for Hallyu. He wants the Suwon campus - which consists of eight colleges and 32 departments with 12,457 students - to become the leading university in Gyeonggi.

Kim was appointed president of KGU in July 2017 after working in media for 40 years. Graduating from Kyunggi High School, he majored in politics at Seoul National University and got a doctoral degree in journalism from Sungkyunkwan University. He joined the Korean Broadcasting System (KBS) in 1973. Starting as a political desk reporter, Kim proceeded to become the head of the political desk, managing editor, director of new media and finally CEO of KBS.

Below are edited excerpts from his interview with JoongAng Ilbo.

Q. How are things since you became the president of KGU?

A. I am busier than I was at the broadcasting company. Since I was the CEO of KBS (from November 2009 to November 2012), people say that running the university must be a piece of cake for me, but they are saying that because they don’t know universities. Universities are organized around a triangular relationship among students, professors and staff. I spent the last 21 months frantically wading through suggestions and procedures that slowed down my workload.

KGU was in a recession for a time. How was the situation back then?

I was surprised. The government-appointed trustee system left aftereffects that lasted 10 years. [The school] was sinking. That is why I thought that if the ship hits rock bottom, it’s done for. Let’s pull it up! Our ship has floated to the surface at last. The Ministry of Education allowed KGU to make changes on its own initiative and the university will get 5.1 billion won ($4.4 million) yearly for three years. Our strategy is to specialize and globalize the school.

A Hallyu graduate school was made on KGU’s Seoul campus. Why did you make this decision?

It is hard for me to make any changes in student quotas in undergraduate colleges. Each department is very sensitive about changing even a single quota. With great consideration, I chose to make the arts graduate school into the Hallyu culture graduate school. It is the only one in Korea. I personally gave a special lecture on “Hallyu’s globalization” on March 5.

Was there any particular thing that got you interested in Hallyu?

It was during the first overseas performance of “Music Bank” at Japan’s Tokyo Dome in 2011. “Music Bank” became popular overseas as it was aired on the KBS World channel. All 45,000 seats in the stadium were full and everybody stood up and went wild. I thought that a gigantic “human earthquake” had erupted.

What is the “New Start” strategy for KGU’s main campus in Suwon?

The campus is near Pangyo Techno Valley [in Gyeonggi], offices of Samsung Electronics and CJ Blossom Park. We plan to increase the close cooperation with local entities in the area. The key is an AI-based campus. If you want to specialize in AI, you have to make the campus focus on software. I have requested the government designate KGU as a software-focused university and applied a specialized training program for industrial AI personnel.

Is there a project that looks promising?

You have emphasized campus globalization, comparing it with Hallyu. What are your plans?

My objective is to produce talented individuals that can be successful in a global environment and build a university where all people can learn. We are expanding our undergraduate English classes and giving scholarships to students with good grades. We have 280 students from 73 partner universities overseas. We plan to expand this to 500 students by 2021. Amy Chua, a professor at Yale University, wrote in her book “Day of Empire” that a common feature in empires that prospered in human history was openness. Universities are the same. Competitiveness comes from opening the gates.