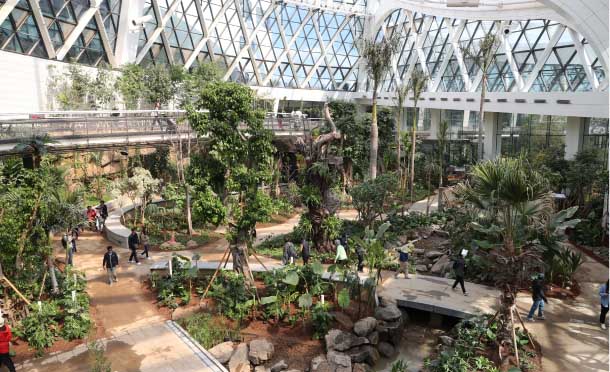 Inside Seoul Botanical Park in Magok-dong, Gangseo District, western Seoul. The spacious garden has over 3,000 plant types. Entry is free until May. [KIM SANG-SEON]

The year so far can be described as three months of dust, dust and more dust.

The air is so thick with pollution that the color of the sky has rarely been anything but a greyish brown. When the dust gets really bad, the government resorts to sending emergency messages encouraging residents to stay indoors and wear masks if they must go outside.

The bad air has been especially stressful for 40-year-old Seoul resident surnamed Cha who has asthma.

“I downloaded an application so that I’m alerted when the fine dust levels become very bad,” she said. “I try not to go out when the pollution is bad, but if I need to, I look for places like cafes and ask whether they have installed air purifiers.”

Like Cha, many people are avoiding outdoor activities and increasingly turning indoors to spend their free time and weekends.

“As fine dust affects our lives on a daily basis and people become more concerned about health, people are skipping the greens and other outdoor activities and looking for indoor alternatives like screen golf centers instead,” said Seo Chun-bum, director of the Korea Leisure Industry Institute.

“The demand for indoor kids’ cafes has been on the rise as parents become worried, and tour operators are also focusing on indoor attractions like museums and galleries,” added Song Jae-guk, a researcher from IBK Economic Research Center. “There have recently also been reports of many people going to department stores while open-door markets are empty.”

While indoor hangout spots may appear to be a safe escape, the air quality inside buildings may be just as bad as it is outside if they’re not equipped with air purifying systems.

Thankfully for Seoulites, there are plenty of indoor green places in the capital where visitors can breathe in fresh air that has been naturally purified by plants and trees.

From botanical gardens to green theaters, the following are a few indoor attractions in or around Seoul that are certified clean. 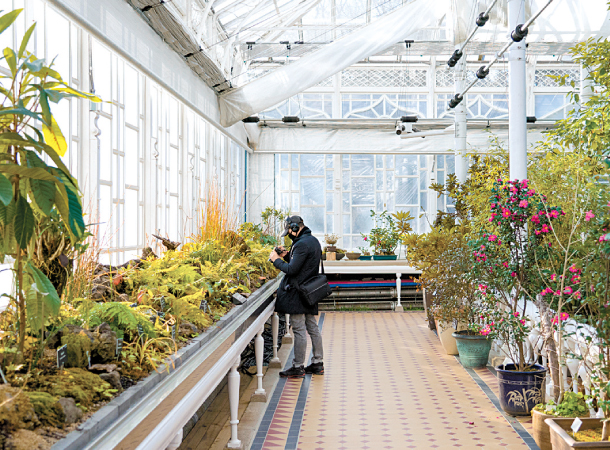 Built in 1909, the Grand Greenhouse on the grounds of the historic Changgyeong Palace is the country’s first western-style greenhouse.

The greenhouse has a bit of a sad history having been “constructed by the Japanese colonial government under the pretext of consoling Emperor Sunjong,” Korea’s last emperor, according to the Cultural Heritage Administration.

Spanning an area of around 580 square meters (6,243 square feet), the facility hosts around 70 different plant types that showcase the beauty of Korea. The Grand Greenhouse is a worthy visit not just for history buffs and nature lovers, but for Instagrammers as well.

Planned by a Japanese designer and crafted by a French company, the delicate white building is framed with a mixture of wood and steel and set in glass. The greenhouse itself was registered as a cultural heritage in 2004.

Admission to Changgyeong Palace is 1,000 won ($0.88) for adults and includes entry to the greenhouse. Hours are from 9 a.m. to 9 p.m. excluding Mondays.

The Seoul Botanical Park is not even officially open for business, but the 500,000 square-meter garden became an instant hit once it began accepting visitors last October.

Around one million visitors have made their way there within the first two months of its unofficial opening, perhaps a testament to their longing for naturally clean air.

“We have a lot of plants known for their powerful air purifying qualities like rubber plants and Tillandsias,” said Jung Soo-min, a public relations official at the botanical garden.

“Though we don’t measure the air quality ourselves, I remember a media outlet measuring the air quality inside our greenhouse and we were all surprised by how clean it was here compared to outside.”

The government-run botanical park holds over 3,000 types of different plants across its different zones which includes a lake, a swamp and its iconic greenhouse.

The greenhouse is a beautiful glass building containing exotic plants and flowers from 12 different Mediterranean and tropical countries - roses from Turkey and Baobab trees from Australia are some of the most popular attractions. A small cave and waterfall add to the magical ambience.

Entry is free until May, when the botanical garden is officially set to open. The garden’s hours are 9 a.m. to 6 p.m. except for Mondays. The grounds outside the greenhouse are open 24 hours. 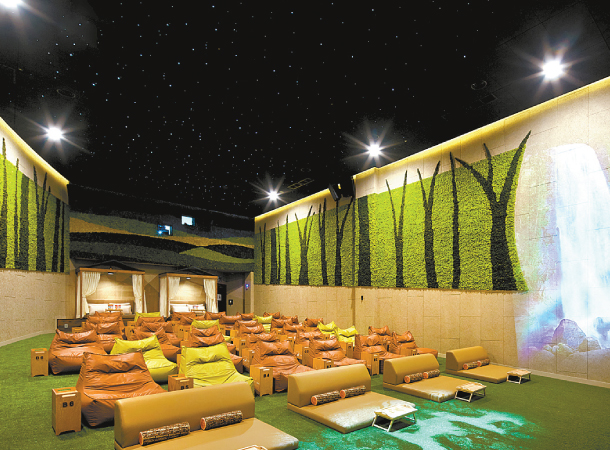 Walking into the Cine & Foret room in CGV’s Gangbyeon branch is like stepping into a forest.

The lush viewing room has grass on the ground and smells earthly. The walls are covered with reindeer moss, appreciated for its ability to not only purify air, but remove dust and humidify the air as well.

“We use oxygen concentrators to match oxygen levels in the room to that of a forest,” said a public relations officer from CGV. “Many visitors just come to take pictures and relax as well.”

The room is small and cozy, with only seating for 48. Moviegoers can sit on bean bags, and for a little extra fee, they can even make themselves comfortable on a soft-cushioned mattress or a tented cabana.

To maximize their stay at the Cine & Foret, visitors are encouraged to arrive to the theater 20 minutes before screening to make use of what CGV calls “picnic” time. Beer and fried chicken are some of the snacks offered at the theater. 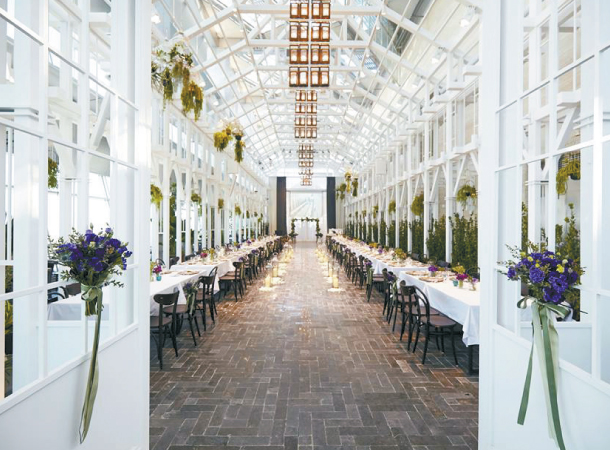 The Skyfarm [THE SKYFARM]

The walls are creamy white, sunlight seeps in from the glass ceiling and plants hang from every corner and line each walls.

It is not a greenhouse, but the trendy restaurant Skyfarm, located on the 51st floor of the Federation of Korean Industries Hall in the busy financial district of Yeongdeungpo, western Seoul, certainly feels like one.

The refreshing space has become a popular hot spot in the neighborhood and long lines are the norm.

Various dishes are available, all made from ingredients picked at local farms. Notable dishes include the Israeli spicy tomato stew shakshuka and the blue crab rose linguine piccole. 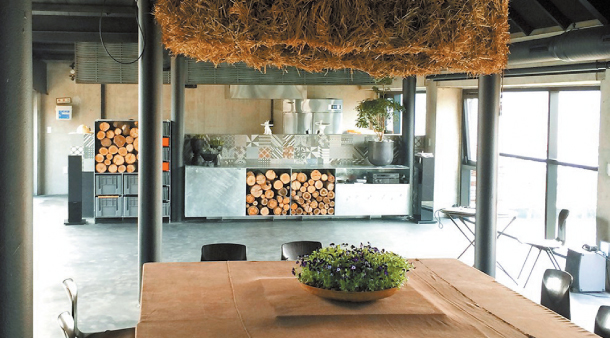 MY ALLEE [MY ALLEE]

Forty minutes outside of Seoul sits My Allee, an eclectic complex that sells everything from garden tools to steak and coffee.

A garden of fresh flowers greets customers upon arrival. A restaurant on the first floor offers a wide selection of food and drinks that use ingredients hand-picked from the farm located in its premise.

Fresh strawberry tarts and salads are available at the third-floor cafe, while a variety of imported garden decorations and tools are sold on the second floor.

Visitors especially like to visit the greenhouse where they can take a seat inside and enjoy the surrounding plants and flowers.

“We filled our greenhouse with a lot of plants that can absorb fine dust,” explained a manager at My Allee. “We also clean the leaves of our plants three times a day to make sure they can absorb and clean air to their full capacity.”

“Compared to last year, we’ve seen a notable rise of customers this year as fine dust levels are much higher,” he added.

My Allee has the distinction of being selected by the Korea Tourism Organization as a place to visit on dusty days.