Technology has become a part of our daily lives, affecting how we shop, share experiences and keep in touch with our friends. One industry that has been relatively slow to change is banking.

But now a force of advanced technologies - artificial intelligence, Internet of Things, big data and blockchain - is disrupting the relatively conservative industry.

Not only do these innovations force major financial services out of their brick-and-mortar branches and into smartphones, but it also changes the way banks process daily transactions and large-scale deals.

A lot has been written about the emergence of innovative fintech firms, but how existing major financial players are adapting themselves to the new era remains relatively unknown.

Due partly to the regulation-heavy nature of the banking industry, change is far from simple and often requires walking a fine line between compliance with existing laws, consumer protection and innovation.

This series - Disrupted Finance - will look into how Korea’s major banks and other financial institutions are embracing one of the biggest transformations in the history of finance and the challenges they face in that endeavor.

Even in this era of rapid technological transformation, some processes are still done manually. One good example of this is the tracking and evaluation of equipment used for collateral by banks.

It can be embarrassingly traditional: bank employees shlep off to far flung sites to look at factory machinery.

Shinhan Bank, the largest bank in Korea by net profit, utilizes Internet of Things (IoT) technology to bring the 19th century process into the future.

With the new IoT platform launched in January, bank employees are able to monitor the health and condition of the machinery with sensors attached to the equipment.

“In the past, the bank dispatched employees once every three months to check on the condition of the assets,” said Jeong Jin-sung, a manager of a digital strategy division who spearheaded the project.

“They had to shoot photos of the equipment, and after coming back from the site, the staff needed to upload the pictures and fill in specific details on an internal system,” he said.

The new system ends the need for site visits, as the IoT technology allows for real-time monitoring of the operating hours of preregistered assets. It can also detect signs of trouble.

The major benefit is a more efficient deployment of human resources by reducing unnecessary tasks. Shinhan Bank plans to expand the use of the platform to other assets, such as raw materials and inventory. 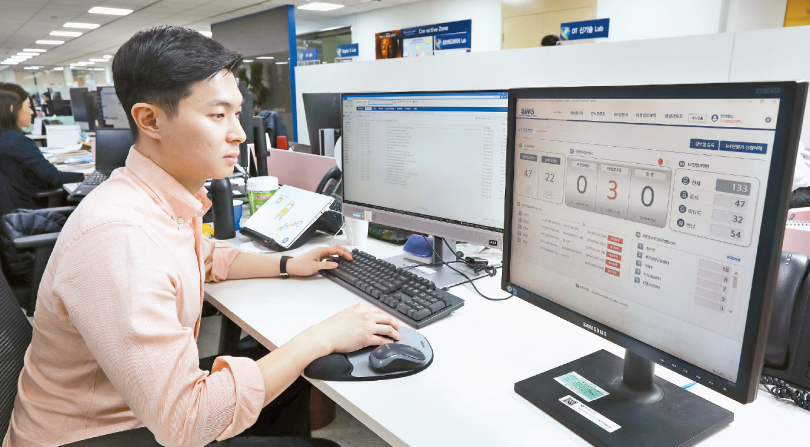 An employee at Shinhan Bank checks the conditions of the bank’s equipment assets on an Internet of Things platform at the bank’s digital lab in central Seoul. [PARK SANG-MOON]

Shinhan is the first bank to use IoT technology for asset tracking, according to Jeong, although some global technology firms like AT&T developed a similar system.

But the usage will likely increase as more financial players work to cut costs and boost efficiencies.

The market for IoT in banking and financial services is expected to grow from $249.4 million in 2018 to $2.0301 billion by 2023, an annual growth rate of 52.1 percent, according to global consultancy MarketsandMarkets.

“The convergence of operational and information technology and the increasing use of IoT devices in product, application and premises monitoring for connected banking are some of the factors driving the IoT in banking and financial services market,” the report said.

“Increasing global investments in IoT and focus on services with real-time data flow are the main growth opportunities for IoT in the banking and financial services market.”

In “The Wolf of Wall Street,” Leonardo DiCaprio coaxes a client over the phone into investing. In some cases, not much has changed.

In derivatives trading in particular, phone-based dealmaking is not uncommon, but Shinhan Bank is looking to blockchain technology to replace the practice and make the process more accurate and less time-consuming.

“Before we adopt the new blockchain system in derivatives trading, Shinhan Bank has to conduct deals over the phone with brokers,” said Yoon Hary, leader of the Blockchain Lab at Shinhan’s Digital R&D Center.

“Then, workers at the two institutions fill in the details of the agreement made over the phone in document form and send them to the deal settlement division at Shinhan Bank via email or fax for final confirmation,” he said.

With the introduction of the blockchain-backed smart-contract system in December last year, those hassles are being eliminated since the new system can digitally facilitate and verify a contract.

Blockchain makes the system possible since data on a blockchain is simultaneously stored in many locations. This decentralized system means that the record cannot be changed without the agreement of a majority of the computers on the network, making it essentially immutable.

Yoon said that blockchain is being applied to transactions beyond derivatives trading, including gold sales.

“In the past, the bank produced a paper certificate when selling gold bars so that buyers can sell the gold back to the bank with the certificate,” Yoon said, “But there have been cases where customers lose the papers.”

In that situation, the gold holders have no way of exchanging the gold for money at the bank. But a blockchain-powered authentication system digitally stores all the information, eliminating the need for holding paper certificates.

The lab leader added that other blockchain projects are underway, including those focused on digital currency payments in traditional markets and cross-border money transfers.

Another important pillar of Shinhan’s digital drive is the orora chatbot’s use of artificial intelligence and big data.

Orora is incorporated into Shinhan’s mobile banking application and is designed to handle different banking services. It can remit funds, provide exchange rates and confirm balances.

But Kim Se-bin, an associate from the R&D center, said that the final vision of orora is much more sophisticated and will do more than just basic banking services.

“Our focus was to design orora so consumers see it as a financial assistant,” Kim said.

The bank hired a broadcasting scriptwriter to help orora achieve a recognizable persona. To make users feel more engaged, orora delivers different greeting messages tailored for individual customers, and the message may change depending on the number of visits a user makes via the mobile banking service.

At present, orora can handle a limited range of tasks, but Shinhan plans to extend its functionality.

“We’ve found that users don’t like spending time finding appropriate menus among numerous options,” Kim said “So, we will include many of those functions in orora so that it can simplify or automate the process”