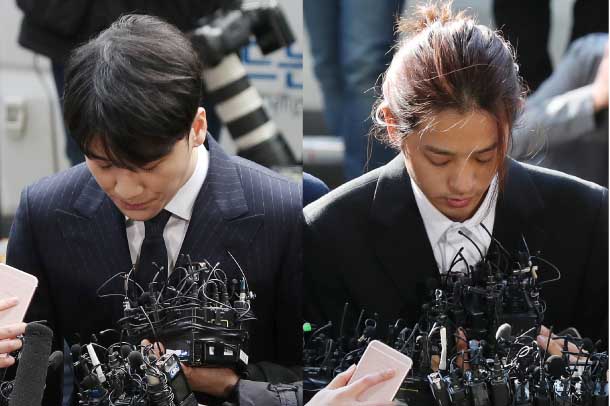 K-pop star Seungri, left, and Jung Joon-young, right, turn themselves in for police investigation last Thursday. Seungri is suspected of offering women for sex to potential investors and Jung is accused of shooting and distributing sex videos without the consent of the women involved. [NEWS1]

In 1987, Italy’s gross domestic product (GDP) increased out of the blue. It suddenly became the world’s fifth largest economy, surpassing that of the United Kingdom. Referring to the total value of all goods and services produced within a country, the GDP is used as a standard measure for the size of an economy. The economic growth rate often refers to the increase of GDP.

The engines of the Italian economy’s growth at the time were the unofficial, underground economy. Unofficial economic activities include commercial and business activities that do not pay taxes, that are unapproved by the government or that do not abide by government regulation. As Italian statistical authorities decided to include the estimated sum of the unofficial economy in GDP statistics, the size of its economy grew by 20 percent overnight.

At the center of Italy’s underground economy is the mafia. Its size can only be estimated. According to the Italian National Institute of Statistics, the size of its illegal underground economy in 2015 was 208 billion euros ($235.9 billion). The annual net profit of the big four mafia organizations is estimated to be $80 billion — equivalent to Oman’s GDP as of October, 2018.

As the mafia’s influence is extensive, it operates in legal businesses such as tourism, retail and real estate. Lately, it has expanded to agriculture, waste treatment and refugee-related businesses. Yet the mafia’s traditional businesses include illegal activities the likes of drug dealing and prostitution. Colluding with power, the mafia commits various crimes, including tax evasion, eluding the law.

The “Burning Sun incident,” while involving drug dealing, prostitution, violence, tax evasion and collusion with police, overlaps with mafia activities. Lawyer Bang Jeong-hyeon, who reported the group chats that include K-pop star Seungri — the key person in the scandal — pointed out that the incident is the beginning of the Korean mafia. The celebrities who gained wealth and status with K-pop popularity were connected with businessmen and colluded with public authorities.