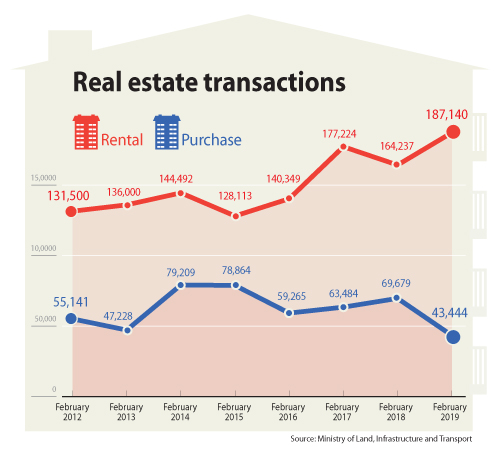 Residential real estate purchases totaled 43,444 in February, down 37.7 percent compared to the same period last year. When compared to the average monthly transaction level of 70,100 in Februarys over the past five years, last month’s figure is down 38 percent.

The numbers for Seoul are far worse. The transaction volume for the capital was 4,552 last month, 74.3 percent lower than February 2018. Including the nearby suburbs, the number is 54.6 percent lower compared to the same month last year.

Buyers instead flocked to the rental housing market. The number of rental transactions last month was 187,140, 13.9 percent up from the same period a last year. The monthly figure is the highest since the government started collecting the data in 2014.

The number of jeonse deals, where tenants acquire lease rights in exchange for massive deposits, increased by 12.2 percent from a year earlier as jeonse prices declined across the country.

According to the Bank of Korea Tuesday, jeonse prices have fallen in all regions since, but the rate of decline was especially fast in Seoul, Gyeonggi and Incheon.

“The recent declines in jeonse prices can be attributed to not only an increase in the number of apartments up for sale but also to the worsening local economy in certain regions and measures to control increasing jeonse prices last year,” the central bank said in a report Tuesday.

The bank expects declines to continue, and projects that 1.5 percent of owners will be unable to pay their deposits if jeonse prices fall by 10 percent.

Yet the central bank estimated the declining jeonse price’s impact to the financial system would not be too threatening, as high-earning owners still account for 64.1 percent of the total.

“It’s not easy for people to sell or buy houses nowadays because tax levels are too high, among many other causes,” said Choi Hwang-soo, a real estate professor at Konkuk University. “The country’s transaction tax rate, especially, is one of the highest among member countries of the Organization for Economic Co-operation and Development.”

But the government is not ready to lower transaction tax anytime soon.

“We are aware that the housing market demands for a decrease in real estate transaction tax,” said Finance Minister Hong Nam-ki in a meeting with top economic policy makers last month. “But we are not considering taking any action at this point.”