Shareholders left out in cold at Samsung AGM

Shareholders left out in cold at Samsung AGM 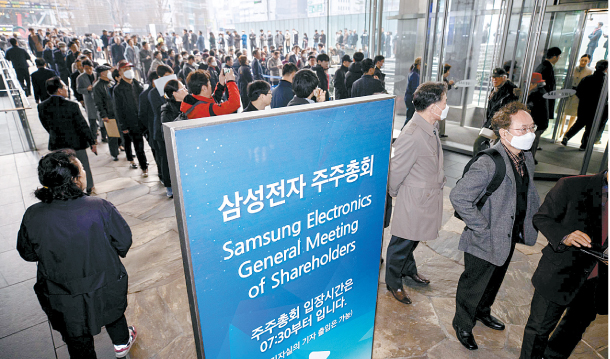 Samsung Electronics shareholders wait in queues to enter the company’s annual general meeting held Wednesday in Gangnam District, southern Seoul. Some had to wait for more than an hour before entering the building. [YONHAP]

Samsung Electronics’ annual general meeting (AGM) dissolved into a farce before it even began on Wednesday, with long lines of shareholders forced to wait outside for more than an hour before being allowed into the venue.

Held in Samsung’s Gangnam headquarters in southern Seoul, this was the first shareholders’ meeting held by the company since a stock split last year. In May, the face value of Samsung Electronics shares was lowered from 5,000 won ($4.40) to 100 won. This boosted the number of Samsung shareholders to around 780,000 people from 240,000 as of late March 2018.

Expecting more participants this year, Samsung doubled the number of seats at the AGM this year to 800. Significantly more shareholders turned up. Some shareholders had to wait outside the venue for more than an hour.

The meeting officially started at 9 a.m., but it wasn’t until 10:30 a.m. that everyone managed to cram into the building. The 1,000 or so shareholders who turned up grew increasingly angry, especially because pollution levels were particularly high on Wednesday.

One shareholder compared the event to a “film festival” rather than a shareholders’ meeting. He had waited for an hour to come in.

Samsung’s Vice Chairman Kim Ki-nam responded with an apology and a promise that the company would prepare a more spacious venue next year.

In the afternoon, Samsung issued a statement sincerely apologizing for the issue.

“We apologize to Samsung Electronics shareholders,” it started. “The number of prepared seats was doubled from last year but was still not enough to meet the level of attention from our stakeholders. In next year’s stakeholders’ meeting, we will do our best to prepare thoroughly in terms of venue and operations.”

All agenda items put to a vote at Wednesday’s meeting were successfully passed, including the appointment of the company’s external directors. With heaps of questions and complaints, the meeting continued for three hours. Shareholders demanded to know how Samsung planned to maintain an upper hand over China in the chip business and the projections for its smartphone business.

“Carefully said, the response on the new S10 smartphone is extremely positive in the Chinese market,” said Samsung President Koh Dong-jin, who overlooks the mobile phone business. “We expect the S series and the budget lineup A series to both raise meaningful results in the Chinese market this year.”

During a speech, Vice Chairman Kim foresaw a difficult year for the company.

“Uncertainty in the global business environment is increasing,” he said. “A force that led demand in components, the smartphone market, has slowed down and data centers cut down on investments - we’re in for a difficult year.

“However, in the wake of the fourth industrial revolution, demand for new technologies like 5G, artificial intelligence, data centers and chips for vehicles are constantly increasing, so we’re expecting them to be opportunities during hard times.”