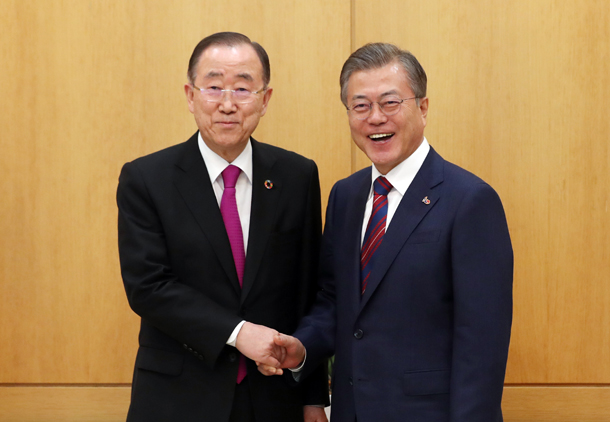 Ban’s acceptance came a little over a week after Moon ordered his Blue House aides to approve a proposal to fight air pollution drafted by the minor conservative Bareunmirae Party that centers on the establishment of a new national fine dust agency. The party recommended Ban, who formerly served as the only Korean secretary general of the UN, to lead the group.

Ban, 74, discussed fine dust with Moon on Thursday afternoon and later showed up at the Blue House’s main press room to personally announce his acceptance of the role as Korea’s dust chief.

Ban stressed that Korea’s political parties must not approach the fine dust problem “as a matter of political gains and losses,” but rather see it as an issue that transcends all ideologies and national borders.

“It wasn’t that I didn’t hesitate at all” said Ban. “Many people expressed their anxiety [over the position] because fine dust involves various domestic and international factors, and it’s not easy to solve the issue, and even if it is solvable, it will take a long time to get there.”

Ban then quoted a part of a speech from former U.S. President John. F. Kennedy that goes, “We choose to go to the moon in this decade and do the other things, not because they are easy, but because they are hard,” and said he was hopeful about solving Korea’s fine dust problem if everyone commits to it.

“It’s very pertinent that we cooperate and carry out joint efforts with other countries in Northeast Asia, like China, which are going through the same issue,” said Ban. The former UN chief vowed to research successful examples of battling fine dust in foreign countries and create a model that best fits Korea.

Moon’s order to establish a new fine dust agency came as Korea was experiencing some of the worst air quality this year, which caused public outcry that the government was failing to confront China about it despite studies that show China is largely to blame. Beijing has long denied any responsibility for Korea’s filthy air.

Fearing that the environmental scourge could create a diplomatic clash between Korea and China, Sohn Hak-kyu, chairman of the minor opposition Bareunmirae Party, said on March 11 during a party meeting that the government should devise a long-term solution that responds to the fine dust issue on “a global level.”

Sohn proposed establishing a fine dust agency involving the National Assembly, government and various sectors of society, while stressing that Ban would be a perfect fit to lead the group.

Ban is a career diplomat who climbed the foreign service’s ranks for decades after passing the entrance exam in 1970. He was Korea’s foreign minister from 2004 to 2006 for the progressive Roh Moo-hyun administration and served as secretary general of the UN from 2007 to 2016.