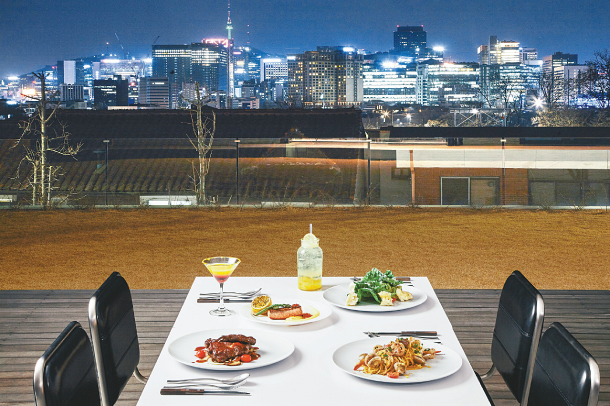 PKM Gallery in Samcheong-dong, central Seoul, operates its PKM Garden restaurant during lunch and dinner to encourage people who come for food to take a look around the gallery filled with artwork. [PKM GALLERY]

Restaurants in galleries and museums aren’t foreign to local diners and gallerygoers in Korea these days, as cultural hubs focus on having dining options available on site. That way, people can either come for food and then discover what’s on display or grab a bite after a day at the gallery.

The best example of this can be seen at Arario Museum in Space, located in Wonseo-dong, central Seoul. The museum is connected to a building filled with restaurants on each floor. Two of the restaurants, Dining in Space, which serves contemporary Western-style food, as well as Hansikgonggan, which serves Korean food, have both been awarded one star by The Michelin Guide Seoul.

Both restaurants are surrounded by floor-to-ceiling windows that provide an unobscured view of the adjacent Changdeok Palace for diners sitting inside.

For more casual diners, there is the Italian restaurant called Brasserie in Space, as well as a cafe called Fritz Wonseo. Fritz is one of the popular specialty coffee chains in Korea.

The idea of a restaurant located close to the artistic space makes the dining spot a more appealing place to some people. Although it isn’t always the case that gallery visitors eat at one of these restaurants or diners before or after they visit the gallery, the idea of being part of an artistic place gives diners the feeling that they did something different than just eating food.

Other galleries around Seoul have been building restaurants inside their facilities. PKM Gallery, located in Samcheong-dong, central Seoul, now operates PKM Garden, which is open to the public.

Before, the dining area was open to those who had a prior reservation and for members of the gallery.

With more people visiting the restaurant showing interest in ongoing exhibitions, the gallery decided to open its restaurant to the public for lunch and dinner in December, after it first opened its lunch service to the public in 2017.

Some works of the artists the gallery work with are displayed inside the restaurant.

“The view here is nice, so we wanted more people to enjoy the view out the window while eating dinner,” said a communications official for the gallery. “There are many workers from the Blue House nearby coming to eat lunch and quickly taking a look around the gallery as well.”

To help people stay in a creative mindset awhile little longer, the Gana Art Center in Pyeongchang-dong, northern Seoul, has decided to open a restaurant that serves Korean food. Chef Tony Yoo opened his second branch of Dooreyoo inside the museum to serve modern-style Korean food.

“There definitely is a synergy,” said a public relations official for the art center. “People who are used to seeing Western-style food like pasta at art galleries welcomed the Korean food available at the gallery, especially some of the foreign visitors who have limited time during their trip.”

Here, a ticket to the art center is free for diners at Dooreyoo, run by a chef who previously earned a Michelin star at another restaurant, to inspire diners to continue their experience inside the gallery.