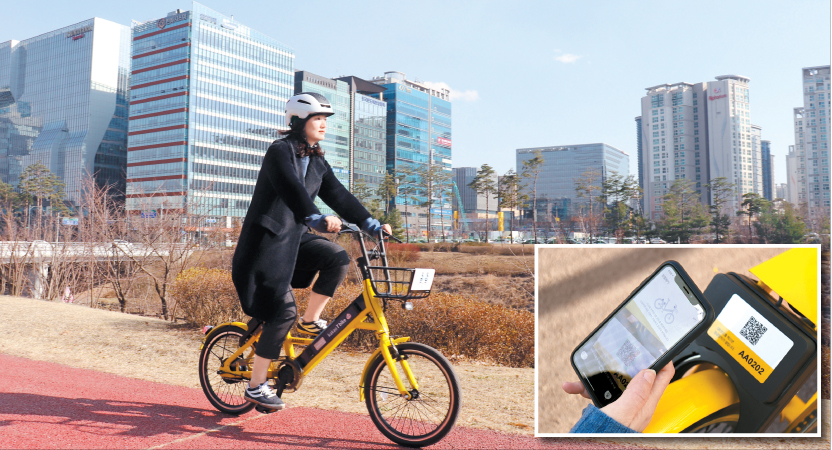 Kim Bo-ra is a 31-year-old office worker at NHN in Pangyo Techno Valley, Gyeonggi. During her lunch break, she likes to go to a gym that is a 20-minute walk away from the office. This month, she found a way to make it there in just five minutes and get some exercise on the way: cycling.

Sharing mobility services using bikes and electric kick scooters are reshaping the lives of Pangyo residents and office workers. Collectively known as micromobility, such services offer a means of transportation for short, local journeys. The expansion has been fast thanks to a young and curious population in an area that is home to some of the country’s biggest IT companies.

Among the most visible players in the field are Kakao Mobility’s Kakao T Bike, which launched this month, and start-up Olulo’s KickGoing, which launched last September. Kakao T bike lends bicycles at 1,000 won ($0.88) for the first 15 minutes, adding 500 won for each additional five minutes. KickGoing charges 1,000 won for the first five minutes and adds 100 won per minute afterwards.

“Pangyo and Yeonsu District in Incheon, Gyeonggi, were selected as the first test beds for the service for two reasons: They both have geographical features favorable for bicycle-riding and a high concentration of IT company employees who are willing to try new things,” explained a Kakao Mobility spokesperson. 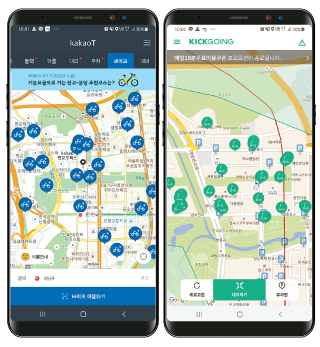 Screenshots of the Kakao T Bike and KickGoing apps. The dots on the screen pinpoint where bikes or scooters are located. [KAKAO MOBILITY, KIM JUNG-MIN]

Like Pangyo, Silicon Valley in California is where micromobility services have the strongest presence in the United States. Last July, Lime, which runs bicycle, scooter and car-sharing services, received $335 million in investments from multiple companies including Google and Uber. The response from venture capitals at the time was that micromobility was an irreversible trend, backed by even the largest IT companies.

One factor that adds to micromobility’s popularity in Pangyo is the public transportation infrastructure. Major IT companies are dispersed around the area and people often have to travel in buses or taxis to get from Pangyo Station to their offices. The services also come in handy when people move from building to building inside the neighborhood for meetings.

“T Bike covers short distances that the existing public transportation can’t and complements it,” said Kakao Mobility CEO Jung Joo-hwan. “We believe the service will settle as a more personalized means of transportation.”

Micromobility also opens a business opportunity for IT companies. It’s not only Silicon Valley giants like Google and Uber that are investing - carmakers like GM and Ford are looking for a way in as well. Start-ups Bird, Lime and Spin have all made a name for themselves in the United States with shared electric kick scooters.

In Korea, the government was among the first to rent bicycles. The Seoul Metropolitan Government officially launched its bike-sharing service, Ttareungi, in 2015. Users can borrow and return the bikes at designated stations. The system is a little different for Kakao T Bike and KickGoing, which both allow users to pick up and drop off at random locations. The current locations of the bikes and kick scooters appear on a mobile app.

“We advise users to park at a bike station near the destination point, but if they can’t find one, they can park them at the corner of a path or an empty space,” said a Kakao Mobility spokesman. The company has an operation team that collects bikes or delivers them to the next user.

KickGoing recommends users return scooters to designated spots. Olulo signed an agreement with the convenience store chain CU so that users can park electric scooters at an empty space in front of its branches.

“Expanding the business will be hard once KickGoing scooters scattered everywhere start to be perceived as city pollution,” Olulo CEO Choi Young-woo. “I can’t really agree with some companies that say it’s O.K. to leave smart mobility equipment in random places.”

Kakao T Bike and KickGoing have been flourishing in Pangyo so far, but there remains a lot of hurdles to overcome. The first is technological issues to ensure a smoother connection between the bikes or scooters. Both services are based on GPS, which means when data connection is weak, users will experience errors.

Another downside is that most users don’t wear helmets. Domestic law does not allow electric kick scooters or bicycles to operate on roads, but a lot of users do not follow this rule.

The industry is rapidly growing as other players enter the market with similar business models.

“Our count of electric kick scooter-related start-ups that have popped up after us is around six to seven,” said Park Shin-wook, a member of the Olulo team. The company even once had their business model copied by a partner in a venture capital firm they had been in discussions with.

One thing that can be said for sure is that smart mobility isn’t going anywhere. Kakao Mobility plans to expand its number of shared bikes from 1,000 to 3,000 by this year’s second half. Olulo is also preparing to expand its serviced regions and increase the number of rented scooters from the current 700 or so to 20,000 this year.