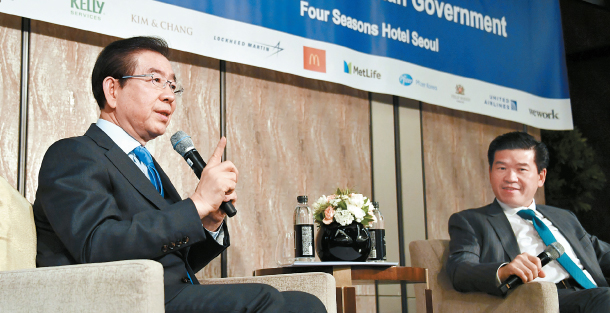 Seoul Mayor Park Won-soon is promising a wide range of support to foreign investors - from housing to cash - in an effort to make the city a global hub for business.

At an event hosted by the American Chamber of Commerce (Amcham) on Monday, Park outlined plans to provide support for foreign investors at the city’s six new industrial clusters.

“The Seoul Metropolitan Government is willing to provide office space within the industrial clusters and cash support, in which we are cooperating with the Ministry of Trade, Industry and Energy,” said Park.

The industrial clusters, currently under development, include one in Magok-dong in western Seoul that specializes in research and development and in Yangjae-dong in southern Seoul that focuses on artificial intelligence. Park also said the city is working with the Ministry of Justice to ease visa guidelines for foreign start-ups that are highly likely to succeed and provide them with housing support through public housing.

Appealing to American businesses, which have made $9.5 billion in foreign direct investment in the city in the past 10 years, Park emphasized the city’s infrastructure and its wide pool of educated youth as strengths.

“Many global companies regard Seoul as a gateway to the Asian market thanks to the business-friendly environment,” said Park. “Seoul is a young city, people in Seoul are ... receptive to new trends and it is a test bed for new products and technologies.”

The mayor addressed concerns that rose last year of the possible ending of a flat-rate income tax for foreign workers in Korea. The Seoul Metropolitan Government’s Foreign Investment Advisory Council warned that it could lead to an outflow of foreign talent.

“The special provisions for foreign employees will not be abolished and instead be extended for three more years,” said Park.

While concerns were raised that the flat-rate tax could end this year, the central government reinstated the exemption last year, according to a Seoul Metropolitan Government official.

Speaking with Amcham Korea Chairman James Kim after his address to Amcham members, Park emphasized cooperation with other cities abroad to reduce the growing levels of fine dust pollution.

“The problem is that fine dust is arising from complicated and different dimensions so a more complex and diverse action must be taken,” said Park, explaining that the city is working with other East Asian cities such as Beijing, Tokyo and Ulaanbaatar.