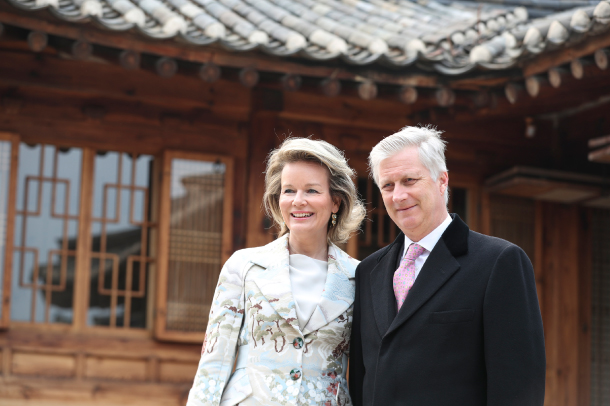 The king and the queen of Belgium at the Korea Furniture Museum, central Seoul, on Monday as they launch their four-day visit to Korea to explore bilateral cooperation on smart city and sustainable development, as well as on climate change solutions and innovations in the health and science sector. [KWON HYUK-JAE]

The king and the queen of Belgium arrived in Korea on Monday to hold a summit with President Moon Jae-in and explore bilateral cooperation in smart city initiatives, sustainable urban development policies, social enterprises and climate change policies.

“Their Majesties the King and the Queen of the Belgians are visiting Korea from March 25 to 28 during which time the king will speak with President Moon Jae-in and pay a visit to speaker of the National Assembly Moon Hee-sang,” said the Belgian Embassy in Seoul in a statement.

After meeting with President Moon at the Blue House this morning, King Philippe is scheduled to attend a presentation at Seoul National University on artificial intelligence and its application in the health sector, and a conference on smart city initiatives organized by the Brussels-Capital Region, Wallonia-Brussels Federation, Seoul-based World Smart Sustainable Cities Organization and Seoul city government.

Queen Mathilde, after meeting with First Lady Kim Jung-sook this morning, is scheduled to visit the Korea National University of Arts to meet with students preparing for the Queen Elisabeth International Music Competition of Belgium.

On Wednesday, she will visit Belgium’s Ghent University Global Campus in Incheon, meet with Ban Ki-moon, the former secretary general of the United Nations, and attend a seminar on the circular economy, sustainable development and climate change. After meeting with the CEO of Incheon Smart City Corporation, the queen will return to Seoul for a meeting at Unicef to discuss the impact of climate change on children.

On Wednesday the Belgian delegation will attend the conference “Industry 4.0 - Opportunities & challenges in South Korea and Belgium” at the Grand Hyatt Seoul, central Seoul.

There are about 400 to 500 Belgians living in Seoul, according to the Belgian Embassy, and the king and the queen will be meeting with some of them.

On Thursday morning, they will pay a private visit to Jeon Jin Sang Clinic headed by Marie-Helene Brasseur, a Belgian doctor who has been practicing in Korea for more than four decades.

She has been recognized in Korea for her dedication to providing medical service to the impoverished.

Their visit will conclude with the Belgian Life Festival at S-Factory in Seongdong District, eastern Seoul, which will celebrate all things Belgian, including music, food and the arts.

Although Princess Astrid of Belgium led a delegation of some 250 people to Korea two years ago to boost business ties between the two nations, the visit by both the king and queen of Belgium is the first in 27 years.

Belgium and Korea established diplomatic ties in 1901 and the Belgian Embassy in Seoul was established in 1970.