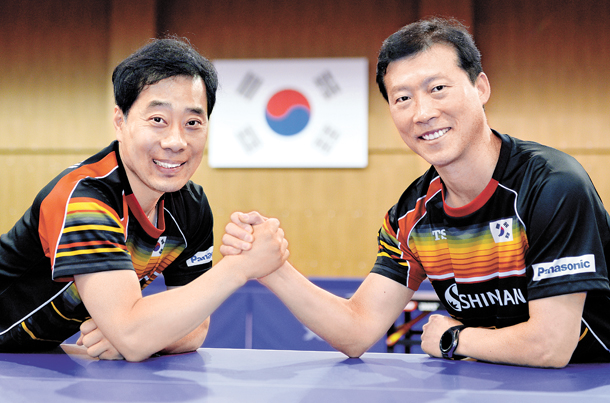 Kim Taek-soo and Yoo Nam-kyu, the head coaches of the Korean men’s and women’s national teams, have dominated Korean table tennis for decades. 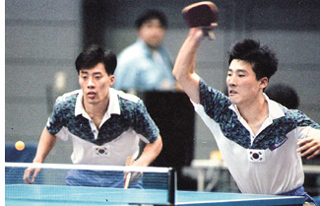 A photo of Yoo Nam-kyu, left, and Kim Taek-soo during the 1992 Summer Olympics in Barcelona, Spain. [JOONGANG PHOTO]

Their historic partnership started in 1986, when the duo competed as doubles partners at the Asia junior table tennis championship in April that year, helping to defeat North Korea to win the men’s team event.

From 1989 to 1994, the two competed together as a men’s doubles team, winning two table tennis world cups, bronze medals at the 1992 Barcelona Summer Olympics and silver at the 1994 Asian Games in Hiroshima.

“At the time, I am confident to say that our [doubles team] was the world’s best,” Yoo said. “But we didn’t win a lot. At the Hiroshima Asian Games, we won against the Chinese team in the semifinals, but in the finals, we lost to Chu Kyo-sung and Lee Chul-seung [the other Korean men’s doubles] group. We could have won a lot more. I’ve had regrets for a long time.”

Despite being partners in doubles, Yoo and Kim had a strong rivalry when it came to the men’s singles. Their two different styles of play - Yoo relying on speed and Kim on consistency - only intensified the competition.

“My only goal and challenge was one person, Yoo Nam-kyu,” Kim said. “That’s how badly I wanted to win [against him]. Up until the early 1990s, Yoo won more, but after the mid-90s, I won more. There were quite a number of fans that enjoyed our rivalry.”

Yoo remembers the physical cost of competing with Kim.

“Once we got our match schedule, I’d started memorizing Kim’s habits and skills like a month before the match,” Yoo said. “In every match, Kim never gave up until the end. So by the end of the match, I was worn out.”

While the two coaches were active as professional players, Korea’s table tennis team was competitive enough to offer a serious challenge to China. However, in recent years, China has gotten significantly better and is now almost unbeatable. Along with China, Hong Kong, Taiwan, North Korea and Germany have also developed into stronger teams.

“I wanted to lead the women’s team and once again challenge them to be the world’s best,” Yoo said.

“Before when I was leading the men’s team, we sometimes played a practice match against the women’s team and I felt proud. But now, it’s the opposite.”

But the pair have been unable to stop the growing dominance of Chinese table tennis. At the 2016 Rio Olympics, Korea finished without a medal for the first time.

Considering Korea’s current level in the sport, the two coaches are determined to bring the teams back to the top.

Although their contract lasts until the Tokyo Olympics, they will be tested within the next month when the Liebherr 2019 ITTF World Table Tennis Championships kicks off in Budapest, Hungary, on April 21.

“We don’t have much time, but we’re working hard to play our best,” Kim said.

“Our starting players are not in their best condition,” Yoo said. “We’re looking long term and are now focusing on building teamwork.”

As the Korean national table tennis team is comparatively younger than in previous years, the two coaches have been working hard to bring the team together. To build teamwork, Kim has been taking his players to play football in their spare time.

However, Yoo has to take a different approach with the women’s team. For him, it’s all about communication.

“In terms of taking care of the women’s team, I have to be more careful,” Yoo said. “We made a group chat on a mobile messenger so we can communicate continuously.”

In the long term, the two coaches have a clear goal in mind - to beat Japan and compete against China.

“There is some pressure that the coaches who used to be star players have to be good,” Yoo said. “We’ve been receiving some attention where people question if Yoo Nam-kyu and Kim Taek-soo can do a great job, but we’ve got to this point by overcoming all that pressure. Both the men’s and women’s teams will overcome Japan and compete against China.”

“Still, there are some people that call us player Kim Taek-soo and Yoo Nam-kyu, rather than head coaches,” Kim said. “That just shows how high their expectations are. We feel a greater responsibility. We have never trained to finish second. I’ll work hard with Yoo and make an upset at the Tokyo Olympics.”