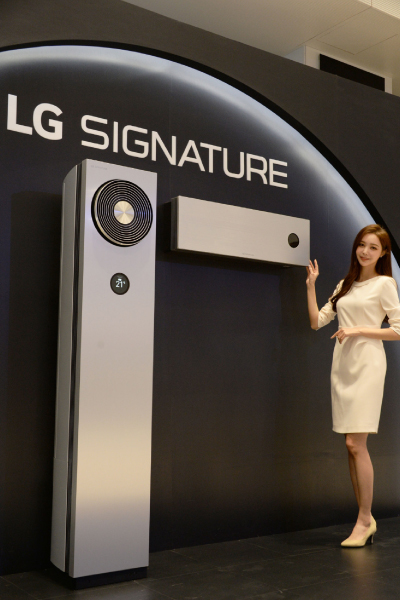 LG Electronics’ new premium air conditioner, set for release in May, is not just for summer.

“In the past, turning on an air conditioner meant [wanting some] cool wind,” said Song Dae-hyun, the president of LG’s home appliance division, at a press event in Magok-dong, western Seoul, on Tuesday. “But now, users will have to specify the function they want from an air conditioner. It used to be a device for summer, but can now be used throughout four seasons.”

LG’s latest air conditioner has a minimalistic appearance. Covered in metal, there are only two circles on the front of the device - one is for airflow and the other is for touch control.

The air conditioner is equipped with artificial intelligence (AI) technology. Based on the room temperature, it automatically turns on necessary functions and also has voice recognition.

Another convenient feature is its ability to automatically sterilize and drain the inner part of the device after being used as a humidifier.

The air purifying function embedded in the premium air conditioner is just as functional as a standalone air purifier, according to the company. However, users won’t be able to move it around from one room to another.

The price of this premium gadget has yet to be decided, but it won’t be cheap, according to Song. LG’s Signature lineup has previously surprised people with its high prices. The brand’s television was priced at 18 million won ($16,000) and its refrigerator costs 11.9 million won.

But the air conditioner’s possible poor sale performance due to its high price isn’t worrying the company.

“We didn’t make this product to sell a large volume. We wanted to make art out of it,” said Song. “Our core focus is to generate positive reviews from customers […] We plan to raise the luxury image of the LG brand through the Signature lineup.”

Through the gradual establishment of a luxurious brand image, Song said the company has been able to enjoy a positive effect on the sales of its more affordable devices.