Korean Air CEO kicked off board

Korean Air CEO kicked off board 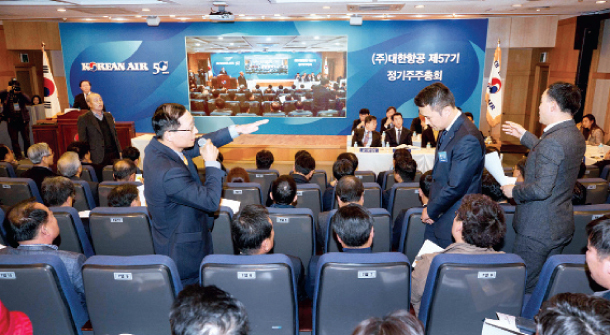 Shareholders argue at Korean Air’s annual general meeting held at the airline’s headquarters in Gangseo District, western Seoul, on Wednesday. Hanjin Group Chairman Cho Yang-ho lost control of the group’s key affiliate Korean Air after failing to extend his term as chairman of the board of directors. Though Cho leaving the board was the preferred outcome for many minority shareholders, some were infuriated that the airline canceled the vote on his reappointment when it realized that more than one-third of shareholders already disapproved of reinstating Cho. [KANG JIN-HYUNG]

Hanjin Group Chairman Cho Yang-ho has lost control of the group’s key affiliate Korean Air as he failed to extend his term as chairman of the board of directors at an annual general meeting held Wednesday.

Cho’s ouster marks the first time that a chaebol owner family member has been forced to step down since the National Pension Service (NPS), the country’s largest institutional investor, adopted the stewardship code last year. The code is a set of principles aimed at guiding institutional investors to exercise their voting rights in a transparent and responsible manner.

It is also the first time that a chaebol head has been ousted by shareholders.

According to a Korean Air spokesperson, Cho is still CEO of the company, but without a seat on the board, it is unclear how much authority he will actually have.

Cho’s loss was expected from Tuesday when the NPS, the airline’s second-largest shareholder, decided through a committee meeting to vote against his re-election. While the Cho family and Hanjin affiliates control 33.35 percent of Korean Air shares, the NPS controls 11.56 percent.

Since many minority shareholders have also expressed doubts about Cho, who is currently facing charges of embezzlement and malpractice, leading the airline, support from the NPS was crucial to ensure his re-election. 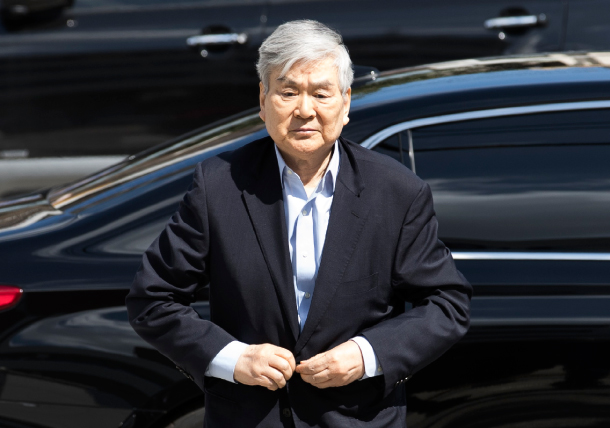 Though Cho has been ousted from the board, Korean Air stressed in a press release Wednesday that the result won’t mean the 70-year-old will completely step aside from managing the airline, citing examples at other conglomerates like retail giant Shinsegae whose owner family controls the company without being on the board.

“He will lose the chairman title, but still remain as CEO,” a spokesperson for Korean Air said. “We don’t know exactly how Cho will exercise his influence over the airline, but details will likely be decided at follow-up board meetings.”

The airline also said that Cho will still likely chair the upcoming International Air Transport Association meeting to be held for the first time in Seoul in June. The international meeting, which gathers CEOs of some 280 airlines from around the world, is hosted by Korean Air.

Cho could also influence the airline through his son Cho Won-tae, who remains on the board and keeps his title as president of Korean Air. Cho’s term ends in 2021.

Still, as Cho Yang-ho has proven unpopular with shareholders, it is likely he will try to keep a low profile for a while. Minority shareholders, in particular, are very unhappy with how the shareholder meeting went Wednesday, despite Cho’s removal.

Korean Air announced Cho would be ousted from the board without holding a proper voting session during the shareholder meeting Wednesday.

Woo Kee-hong, executive vice president of Korean Air and the moderator of the meeting, announced that the company had already counted the shareholders who have expressed a will to vote against Cho, realizing that he cannot win the two-thirds majority approval required.

According to Woo, 35.9 percent of shareholders present had said that they would oppose Cho’s re-election before the meeting. A company spokesperson explained that the company canceled the vote as soon as they realized more than one-third of shareholders already disapproved of reinstating Cho.

Though Cho leaving the board was the preferred outcome for a large number of minority shareholders, the airline’s decision not to hold a vote infuriated those that attended the annual general meeting.

Woo, however, said the meeting can proceed without a vote if the result is already fixed and minority shareholders would make no difference.

Industry insiders hope the change will lead to the airline improving its corporate governance structure and recover its tainted image after a series of high-profile scandals involving the Cho family, including the nut rage incident in 2014. Cho has chaired the company since 1999 when he took over from his father Cho Choong-hoon.